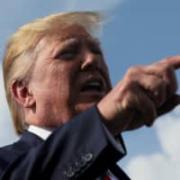 BERKELEY HEIGHTS, NEW JERSEY – President Donald Trump's top economic adviser is playing down fears of a looming recession after last week's sharp drop in the financial markets and predicting the economy will perform well in the second half of 2019. Larry Kudlow said in Sunday television interviews that consumers are seeing higher wages and are able to spend and save more. "No, I don't see a recession," Kudlow said. Let's not be afraid of optimism." A strong economy is key to Trump's reelection prospects.

Get all the latest news on coronavirus and more delivered daily to your inbox. White House trade adviser Peter Navarro told Fox News' "Sunday Morning Futures" in an exclusive interview that President Trump "built the most powerful and beautiful economy in the world in three years," but, "the Chinese communist party took it down in 60 days." Navarro made the claim three days after House Republicans launched a "China Task Force" to coordinate a strategy against the geopolitical threat from Beijing -- coming amid global scrutiny over China's handling of the coronavirus outbreak. The group will set priorities, gather information and coordinate approaches to the threat coming from China, including dealing with legislation, The Washington Post first reported. The group also is expected to look at China's influence in the U.S., its efforts to take over international organizations, supply chains and more, along with China's role in the coronavirus pandemic.

White House trade adviser Peter Navarro joins Tucker Carlson on'Tucker Carlson Tonight.' White House Trade Adviser Peter Navarro accused U.S. manufacturing conglomerate 3M Friday of "whining" about criticism from President Trump over its distribution of N95 masks amid the coronavirus pandemic. "Let me just say that 3M needs to stop whining and just produce masks and get them to the American people," Navarro told "Tucker Carlson Tonight." "I've been dealing with hundreds of CEOs on the front lines here [of] President Trump's war against the virus," Navarro added, "and 3M has been doing nothing but dissembling, he can't get any data out of them." Minnesota-based 3M has come under fire for exporting U.S.-made masks and other protective equipement to Canada and Latin America. On Thursday, President Trump invoked the Defense Production Act to order 3M to prioritize orders of N95 masks for the federal government's national stockpile.

For Trump, China is at the heart of U.S. economic problems

HARI SREENIVASAN: But, first: Trade, globalization and the impact on wages and jobs are issues that have spoken strongly to voters throughout this presidential campaign. Both Donald Trump and Hillary Clinton are talking very differently about the subject than prior nominees. And for Trump, it's been a major focus of his campaign. As part of our continuing coverage of the issues, our economics correspondent, Paul Solman, is spending the next three weeks focused on those questions. Tonight: how Donald Trump sees it, and some of the concerns about that approach, part of our weekly Making Sense series, which airs on Thursdays.

What is the Trump trade doctrine? His economic adviser explains

Republican presidential candidate Donald Trump holds a rally with supporters in Albuquerque, New Mexico, U.S. May 24, 2016. For this week's Making Sen e report, economics correspondent Paul Solman spoke with Navarro at length about the trade deficit, China and the Trump trade doctrine. You can watch that segment on tonight's PBS NewsHour. The following conversation has been edited for clarity and length. PAUL SOLMAN: So let's start with China.