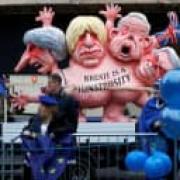 BRUSSELS – The EU voiced alarm Monday as a survey showed 9 of 10 European Jews believe anti-Semitism has worsened in the last five years, calling it a "canary in the coal mine." The European Union's Agency for Fundamental Rights (FRA) said 85 percent of Jews surveyed believe anti-Semitism is the main problem in their country and 38 percent have considered emigrating. "Whenever communities are set up one against the other, whenever identity politics comes into the game again, then the first victims are always the Jews," European Commission Vice President Frans Timmermans said "You need to know that anti-Semitism is like the canary in the coal mine," he told a news conference. In the 1930s, Nazi Germany's state-sponsored anti-Semitism paved the way to the Holocaust, in which 6 million Jews died. The former Dutch foreign minister said Europe had had many diseases in the 20th century but the only one that has "remained incurable is anti-Semitism.

Many European countries have started easing coronavirus-related travel restrictions, with June 15 seeing several of them open up to visitors from certain countries. Each country is following its own timetable. Albania reopened its land borders on June 1, but the country still bans mass gatherings until June 23. The government also opened beaches serving hotels in June. Austria will reopen its borders on June 16, and lift a quarantine requirement for incoming travellers from within the EU, excluding the United Kingdom, Sweden, Spain and Portugal.

French President Emmanuel Macron has announced a number of coronavirus restrictions are being lifted. Cafes and restaurants are reopening across France and travel to other European countries will be allowed. People will also be able to visit family members in retirement homes, which have been hit particularly hard by the Covid-19 outbreak. Germany, Belgium, Croatia and Switzerland are fully reopening borders with EU countries on Monday. Travellers from the UK will be able to visit these four countries without quarantine or restrictions upon arrival, though they still face quarantine on return to the UK.

Human biohacking: an exciting prospect, but only for the rich?

A multi-nation study finds that many of us consider biohacking exciting, but fears concerning hacking and privacy remain. Human augmentation can describe many things. Hearing aids, pacemakers, and prosthetics are already in use, but in the future, we could be using the term for implants that improve cognitive abilities; chips that connect us to our smart devices, or bionic eyes that can restore lost sight, and more. When it comes to future applications, countries worldwide are pushing ahead with the development of new technologies which could result in enhancements to the human body. For example, Japan has recently set $1 billion on the table for researchers willing to pursue everything from human augmentation to longevity, due to the need to tackle an aging workforce and shrinking population.