James Taylor, a senior fellow at Heartland, an Illinois-based group that dismisses climate change, said it is encouraging well-rounded classroom discussions on the topic. The group, which in 2017 sent thousands of science teachers copies of a book titled "Why Scientists Disagree About Global Warming," is now taking its message directly to students. A reference book it is planning for publication this year will rebut arguments linking climate change to hurricanes, tornadoes and other extreme weather.

Meanwhile, the engineering firm Atkins considers the CCC over-optimistic. Its separately-published analysis shows the UK needs to build 12-16GW of new generation capacity each year between now and 2035. It warns: "The pace of new-build and complexity of the challenge means a dash to decarbonise power by 2035 may no longer be a credible ambition for the UK."

The truth behind corporate climate pledges

For climate campaigners, 26 May seemed like the start of a long-awaited reckoning for oil and gas companies. Over a single 24-hour period, a Dutch court ordered Shell to dramatically cut emissions, shareholders voted to force Chevron to reduce emissions from the products it sells, and a tiny activist investment firm secured three positions on ExxonMobil's 12-member board for candidates committed to climate action. When trying to ascribe responsibility for the climate crisis, it's hard to overstate the outsized role fossil fuel companies have played. The products of just 100 private and state-owned fossil fuel companies were linked to 71% of global industrial greenhouse gas emissions since 1988, according to a groundbreaking 2017 report. A subsequent Guardian investigation in 2019 found 20 fossil fuel companies, including Chevron and ExxonMobil, were responsible for more than one-third of all greenhouse gas emissions since 1965 – the point at which experts say fossil fuel companies were aware of the link between their products and climate change.

When kids and teenagers think about the future, they have an extra burden: They have to deal with more of it than adults. An adult might look at the United Nations' most recent climate report, which models the long-term effects of failing to contain the rise in global temperatures, and figure they'll be long gone before the worst of the floods and firestorms hit. Which of course misses the point that climate change is already killing people, and that we need immediate action to keep it from getting worse. Kids today are facing 70, 80, 90 more years of this stuff. Tara Crandon, a psychologist at the QIMR Berghofer Medical Research Institute and the University of Queensland in Australia, hears these kinds of fears from her young patients.

'Not seeing the urgency': Communications failure blamed for climate inaction 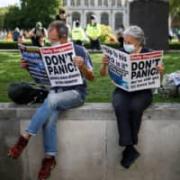 London – Humans' collective inability to stem planet-heating emissions -- which continue to rise despite pledges to slash them -- is largely the result of failures to communicate the risks effectively, government officials and activists said this week. Even as scientific warnings grow clearer and more urgent, and climate-linked hazards such as more deadly wildfires and destructive storms and droughts affect more people, too few see the rising threats as urgent, they warned. "Many people still do not seem to fully understand it is impacting our lives today," the U.K.'s Prince Charles told an online event run by the Red Cross Red Crescent movement. "We simply cannot sit back and wait for the climate to change around us and accept these disasters as an inevitability," said the prince, who is president of the British Red Cross. While slow progress on addressing the growing climate threat is often blamed on a lack of funding, political will or public acceptance of lifestyle changes, that could be reversed if more people recognized the risks, panelists said.