The first sighting of a Bigfin squid has been seen in the Great Australian Bight by researchers.The species has only had 12 recorded sightings world wide and tends to live in darker parts of the ocean.

An adorable piglet squid has been spotted in its natural home deep in the Pacific Ocean by a team of passing researchers. The inquisitive animal was snapped on camera by the E/V Nautilus team exploring the Palmyra Atoll earlier this month. They spotted the creature at 4,500ft (1,385m) and paused to enjoy the moment with the small marine animal. The Nautilus team, from non-profit organisation Ocean Exploration Trust, used an ROV (Remotely operated underwater vehicle) to enjoy the quick close-up. The see-through piglet squid (Helicocranchia sp.) is named for its large siphon that looks like a snout.

Has the KRAKEN been spotted on Google Earth? Giant squid like create could be 120m long 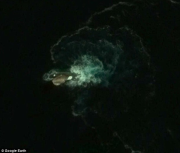 Remotely controlled submersibles have filmed two deep-sea species of squid gulping down members of their own species. Several species of squid, including giant squid, are known to eat each other. But we have mainly gleaned this from their stomach contents, and it wasn't clear if this was normal behaviour, or something they did when they have been caught in a net, says Henk-Jan Hoving at the GEOMAR Helmholtz Centre for Ocean Research in Kiel, Germany. "Animals get stressed in a net," he says. "They probably start doing something called'net feeding' – they feed on anything that is close by."