Why this N Korea missile test is different

On the morning of 12 February, North Korea conducted a ballistic missile test launch from Banghyon air base near the west coast of the country. Like all such launches, the test took place in defiance of UN Security Council resolutions. Pyongyang's press release, issued a day later, indicated that the missile - the Pukguksong-2 - was of the same type as one test-fired from a submarine off the east coast in August 2016. Unlike North Korea's other long-range land-based missiles, the system tested on 12 February used solid fuel. Until now, the country's comparable land-based missile systems have been liquid-fuelled.

Nuclear super weapons that Vladimir Putin claims can strike anywhere on the planet are being tested by Russia, military footage has revealed. Daunting images purport to show the latest round of tests for the missiles, which the military says are capable of wiping out an area'the size of Texas or France'. The RS-28 Sarmat missiles are capable of striking targets via both the North and South poles and can carry more nuclear warheads than any other missile on the planet, Russia claims. What's more, the RS-28 Sarmat missiles are able to deliver up to 24 of Russia's new Avangard hypersonic gliders, each of which can carry its own nuclear payload. There is currently no method of defence against the Avangard cruise missiles, which can allegedly travel at 20 times the speed of sound.

Sometime between noon and 4 p.m. today, a towering rocket is scheduled to be launched from an underground silo about 60 miles northwest of Santa Barbara in the latest test of the nation's troubled homeland missile-defense system. The launch, from Vandenberg Air Force Base, may be seen, heard or felt by tens of thousands of residents along the Central Coast. At nearly the same time today, the U.S. Missile Defense Agency also plans to oversee the launch of a target missile thousands of miles away, at Kwajalein Atoll in the Marshall Islands. The rocket from Vandenberg will attempt to intercept and destroy the target missile in space -- most likely above waters east of Hawaii that have been temporarily closed to all shipping. Preparations for the test unfolded amid stepped-up concerns over the security threat posed by North Korea.

President Trump participates in the Missile Defense Review announcement at the Pentagon. President Trump announced on Thursday a new, more aggressive space-based missile defense strategy to counter threats from North Korea and Iran and to compete with advanced weapons systems being developed by countries like China and Russia. The president laid out his administration's Missile Defense Review -- the first compiled since 2010 – during a speech at the Pentagon, where he highlighted the threat the United States faces from new missile technologies being developed by foreign nations and the growing importance of weaponizing space. "The world is changing," Trump said. "The United States cannot simply make incremental changes…It is not enough to just keep pace with our adversaries."

Don't Read Too Much Into That Successful Missile Defense Test 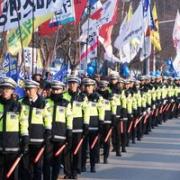 The United States successfully tested its interceptor missile defense system on Tuesday, essentially shooting an incoming missile out of the sky. An impressive technological feat to be sure, one the Pentagon likens to hitting a bullet with another bullet. But as proof that such a system could defend the US against a North Korean attack, it still misses the mark. Think instead of the $244 million test as a competent recital, a choreographed display of US missile defense capabilities under optimal conditions. It leaves open the question of how the so-called Ground-based Midcourse Defense system would perform under real-world conditions--and how North Korea might respond to this latest demonstration of a system that US has spent almost two decades testing.