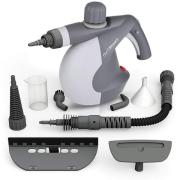 Let's face it: Unless you're Rachel Lindsay from season 13 of The Bachelorette, you probably don't take pleasure in dancing around with your vacuum cleaner all day. But cleaning your living space is just one of those adult things we all have to do. So how can you make that process as quick and painless as possible? Enter the handheld steam cleaner. Many handheld steam cleaners offer a more eco-friendly and more modern alternative to whipping out the mop and cleaning chemicals.

Meanwhile, many older titles are playable with issues. For example, Persona 4 Golden runs well on the handheld - as you would expect of a game originally released on PlayStation 2 and remastered for Sony's handheld PlayStation Vita. However, it currently does not play audio during cut scenes, and has extended black screen delays exiting battles.

The rumors about Valve making a version of the Nintendo Switch for handheld Steam gaming are true. The company has revealed the Steam Deck, which will arrive in December in the US, Canada, the European Union and the UK, with availability expanding to more regions later. The system starts at $399. Although the hardware isn't final, according to IGN, the console currently looks like a mashup of a Switch, a Sega Game Gear and the Steam Controller. It has a seven-inch touchscreen, with a resolution of 1,280 x 800 at a 16:10 aspect ratio, 400 nits of brightness and a 60Hz refresh rate.

Valve Steam Deck vs. Nintendo Switch: Which gaming handheld should you buy?

You'll often hear PC enthusiasts--including yours truly--say that the Nintendo Switch is the perfect companion console for your gaming rig, thanks to its handheld mode for on-the-go gaming, deep indie library, and access to Nintendo-exclusive games. The stickiness of that last benefit will soon be put to the test, as Valve's newly announced Steam Deck handheld PC mimes the Switch form factor but revolves around your existing Steam account...and all the games already in it. In the battle of the Steam Deck vs. the Nintendo Switch, who comes out on top? We'll take it to the tape below, but first let's talk about what matters most: the games, and why the Steam Deck and Nintendo Switch might not even be true competitors at all. The $399 Steam Deck and $299 Nintendo Switch have two totally different gaming philosophies.

The Morning After: Valve made a $399 handheld gaming PC

Valve just surprised us all with a handheld console. The $399 Steam Deck will arrive in December, with availability expanding to more regions later. Looking like some unholy alliance of Sega's Game Gear and the Nintendo Switch, the hardware includes a seven-inch touchscreen at 1,280 x 800 resolution at 60Hz refresh rate. There is no shortage of control options either, with dual thumbsticks, two pretty large square trackpads, an old-school directional pad, four main face buttons, triggers and a quartet of grip buttons. Valve has ensured there's enough power inside to tempt PC gamers that already have an expansive Steam library.