Facebook tries to bring back Pokes on the down low

Facebook is up to its old tricks again, trying to reintroduce one of its original features -- but like Mean Girls' second-fiddle Gretchen Wieners trying to make fetch a thing, it's just not gonna happen. The social network is trying to bring back that slightly creepy, uncomfortably direct notification that you never quite understood: the Poke. The new feature, called Hello, is essentially a Poke in the form of a Wave, allowing users to notify one another that they're feeling chatty, but don't quite have the words for a full on post. The new Hello feature was first spotted by The Next Web's Matt Navarra, who's known for keeping tabs on the many new wrinkles and tests from the social network. Facebook reps confirmed the feature is being tested for some users, who at this point appear to be based in the UK.

Facebook is working "24/7" to tackle content including "stop the steal" from spreading across the network ahead of the US Inauguration Day. With the scenes at the Capitol building fresh in our minds and as US police continue to hunt down rioters involved in the siege, thoughts have turned toward the upcoming inauguration, when President-elect Joe Biden will be sworn into office on January 20. The FBI has warned states of potentially armed protests ahead of and during the event, and in an attempt to prevent Facebook from becoming a means to incite further violence, the social network has begun preparing for Inauguration Day with "new urgency." According to Guy Rosen and Monika Bickert, Facebook VPs of Integrity and Global Policy Management, the company has assessed the next two weeks as a "major civic event." On January 11, the duo said the same teams used to tackle inappropriate content ahead of the US election are now in place to try and stop the spread of misinformation, conspiracies, and violent content.

How To Use Facebook At Work, New Business Service From The Social Network

Facebook is getting ready to launch a new program called Facebook at Work, a collaboration and communication network that lets everyone in the office stay up to date on group projects. Facebook at Work uses communications tools like the News Feed, Groups, Events and a Messenger app, which is all powered by the same algorithm as Facebook, except you get to chat with your company instead of your friends. A profile includes a photo and employee information, such as position and department. Groups also have three different categories: open, closed, or secret. Open groups can be used to spread company news or updates.

The time has come to remove Facebook from your life

This is not the exhortation of an internet troll, but rather the earnest advice of someone who has peered deep into the blue and white abyss and found only varying degrees of despair. Facebook is unlike any other social media offering in numerous important ways, and while some of those differences add value, the whole ends up being depressingly less than the sum of its parts. This, however, is not the story of a confusing user interface, or a diluted brand trying to be everything to everyone -- it's much bigger than that. This is about how Facebook is actually bad for you, and it's past time that we admitted it. Who of us hasn't at least once threatened to delete our account? 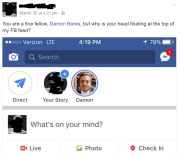 The network, in its efforts to become a bit more social again, has drowned users in new features, tests and other distracting knickknacks -- and for perhaps the first time in the service's 13-year history, it's not altogether clear what you're supposed to do when you log in each day. SEE ALSO: Snapchat needs to evolve--or it'll be brutally slaughtered by Facebook. A quick rundown: In the past few weeks, Facebook has introduced a "Stories" feature, a new way to post colorful blocks of text as status updates, a "false news" identification tool, and, for some users, a new "rocket" icon that connects to an alternate news feed filled with bits and bobs you'll supposedly enjoy interacting with based on what the company's algorithms understand about your behavior. And actually, it's an incomplete list -- we just wanted to brace you. Facebook has also rolled out a new pop-up tab system on desktop that shoves comments in your face if you're mentioned.