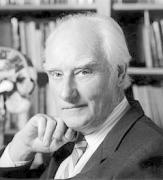 Francis Harry Compton Crick OM FRS[1][4] (8 June 1916 – 28 July 2004) was a British molecular biologist, biophysicist, and neuroscientist, most noted for being a co-discoverer of the structure of the DNA molecule in 1953 with James Watson, work which was based partly on fundamental studies done by Rosalind Franklin, Raymond Gosling and Maurice Wilkins. Together with Watson and Maurice Wilkins, he was jointly awarded the 1962 Nobel Prize in Physiology or Medicine "for their discoveries concerning the molecular structure of nucleic acids and its significance for information transfer in living material".[3][6] Crick was an important theoretical molecular biologist and played a crucial role in research related to revealing the helical structure of DNA. He is widely known for use of the term "central dogma" to summarize the idea that genetic information flow in cells is essentially one-way, from DNA to RNA to protein.[7] During the remainder of his career, he held the post of J.W. Kieckhefer Distinguished Research Professor at the Salk Institute for Biological Studies in La Jolla, California. His later research centered on theoretical neurobiology and attempts to advance the scientific study of human consciousness. He remained in this post until his death; "he was editing a manuscript on his death bed, a scientist until the bitter end" according to Christof Koch.[8] Crick was the first son of Harry Crick (1887–1948) and Annie Elizabeth Crick (née Wilkins; 1879–1955). He was born and raised in Weston Favell, then a small village near the English town of Northampton, in which Crick's father and uncle ran the family's boot and shoe factory. His grandfather, Walter Drawbridge Crick (1857–1903), an amateur naturalist, wrote a survey of local foraminifera (single-celled protists with shells), corresponded with Charles Darwin,[9] and had two gastropods (snails or slugs) named after him. At an early age, Francis was attracted to science and what he could learn about it from books. As a child, he was taken to church by his parents. But by about age 12, he said he did not want to go anymore, as he preferred a scientific search for answers over religious belief.[10] Walter Crick, his uncle, lived in a small house on the south side of Abington Avenue; he had a shed at the bottom of his little garden where he taught Crick to blow glass, do chemical experiments and to make photographic prints. When he was eight or nine he transferred to the most junior form of the Northampton Grammar School, on the Billing Road.

The University of Cambridge professor was an iconic figure in both the scientific community and in popular culture, known for his keen mind and humor, as well as his striking physical challenges. Dr. Hawking had long battled with amyotrophic lateral sclerosis, which left him wheelchair-bound for most of his life. Commonly known as Lou Gehrig's disease or motor neuron disease, the condition damages the nerves that control movement and results in paralysis. Patients with ALS typically die within five years of diagnosis. Dr. Hawking, who was diagnosed in 1963 at the age of 21, is believed to have been the longest-living survivor, a fact that still perplexes neurologists.

The extraordinary life in pictures of Stephen Hawking

Stephen Hawking was one of the world's most acclaimed cosmologists, a medical miracle, and probably the galaxy's most unlikely superstar celebrity. After being diagnosed with a rare form of motor neurone disease in 1964 at the age of 22, he was given just a few years to live. He died today his home in Cambridge, aged, 76, and tributes have flooded in from all over the world. Here, MailOnline looks at his life in pictures.... Stephen Hawking (left) pictured as a young boy, with his baby sister Mary. As an undergraduate at Oxford (pictured on his graduation day in 1962), the young Hawking was so good at physics that he got through with little effort.

Professor Stephen Hawking has died at the age of 76 - more than 50 years after he was given just two years to live. The world's most celebrated scientist passed away peacefully at his home in Cambridge this morning after a long battle with motor neurone disease, his family has revealed. His children, Lucy, Robert and Tim said in a statement: 'We are deeply saddened that our beloved father passed away today. 'He once said, 'It would not be much of a universe if it wasn't home to the people you love.' We will miss him forever'. They also said their father's'courage, persistence, brilliance and humour inspired people across the world' - shown in a recent poll that saw him voted the 25th greatest Briton of all time. Professor Hawking was diagnosed with motor neurone disease in 1963 when he was 21 and he defied medical experts who said he would be dead within two years. In the following 55 years he became the world's most famous scientist since Albert Einstein for his work exploring the mysteries of space, time and black holes despite being wheelchair-bound and only able to communicate using a computer and his famous voice synthesizer. University of Cambridge vice-chancellor Professor Stephen Toope said today: 'His exceptional contributions to scientific knowledge and the popularisation of science and mathematics have left an indelible legacy. His character was an inspiration to millions'.

Stephen Hawking mourned by celebrities after his death at age 76

The world today paid tribute to physicist Stephen Hawking, who died today at the age of 76. The famed British theoretical physicist passed away peacefully at his home in Cambridge this morning after a long battle with motor neurone disease, his family has revealed. And the celebrity and scientific world, including NASA, Katy Perry, and Piers Morgan, took to Twitter to pay their respects to the father of three. His theories unlocked a universe of possibilities that we & the world are exploring. The world just dropped a lot of IQ points.