Amazon's self-driving robots will be roaming the streets of another neighborhood. The online shopping giant said Tuesday that the six-wheeled robots, about the size of a smaller cooler, will begin delivering packages to customers in Irvine, California. It comes after Amazon began testing them in a suburb of Seattle at the beginning of the year. Amazon AMZN, 1.29% said the robots, which are light blue and have the Amazon smile logo stamped on its sides, are able to avoid crashing into trash cans or pedestrians. Still, a worker will accompany the robots at first. 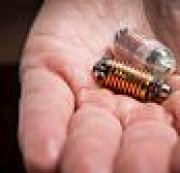 Amazon is rolling out self-driving delivery robots. The internet giant announced Wednesday that six'Scout' robots will deliver packages to customers in a neighborhood in Snohomish County, Washington. Each Scout robot is a squat, bright blue device that gets around on six wheels. The battery-powered devices about the size of a small cooler and can deliver packages autonomously. And city or suburban dwellers don't have to worry about Scout running them over on the street, as Amazon says the robots'roll along sidewalks at a walking pace.'

Amazon is working on delivery robots, and it's already bringing the self-driving machines to the streets. Starting today, six Amazon Scout devices are delivering packages in a neighborhood in Snohomish County, Washington, north of Amazon's Seattle home base. While the robots can navigate by themselves, an Amazon employee will accompany them, at least for now. Scout is about the size of a small cooler and it trundles along at walking pace. Amazon claims the battery-powered robot can safely deal with obstacles such as pedestrians and pets.

No matter who you ask, the near-future of delivery seems to involve fleets of robots shuffling packages from stores, down sidewalks, and onto doorsteps. Robots will lug grocery bags from market to kitchen; they'll begin to replace humans delivering take-out and dropping off parcels. And soon, your Amazon Prime packages may show up courtesy of Scout, Amazon's new six-wheeled autonomous delivery robot built to withstand the sidewalk. Amazon announced on Wednesday that it will begin field testing Scout in Snohomish County, Washington, with Prime customers who request same-day, one-day, or two-day delivery. For now, Amazon says it will limit its testing to daylight hours during the week, when sidewalk traffic is lowest.

A fleet of Amazon'Scout' delivery robots will roam the streets of Southern California as part of the firm's largest trial of automated'last mile' delivery. Last-mile delivery is the last stage of getting a package from a warehouse to your door, traditionally completed by a van or truck. Retailers and courier firms are racing to automate this process through the use of drones, either by land or by air. Amazon's latest roll-out follows a successful trial conducted in a small neighbourhood in Washington state earlier this year. Each Scout robot is a squat, bright blue device that gets around on six wheels.