TL;DR: Take to the skies with the Kai One Pro 8K HD Drone, on sale for $299.95 as of Oct. 15 -- that's a 70% savings. Some drones simply fly away from you and return on command. This $1,000 drone does so much more, it may start to rival your smartphone. And for a limited time, you can take it home for less than $300. The Kai One Pro 8K HD Drone does it all. You can view real-time photographs from the ground as they're being taken, and even adjust your shot by using a wide range of high-definition angles.

China's police are now shooting down drones with radio-jamming rifles

A Chinese city's police department is arming itself with more than 20 drone-jamming rifles to crack down on illegal drone flights. Police in Wuhan, central China, are going to be equipped with 20 of these rifles, which work by emitting radio signals that force the drones to land purportedly without damaging them. The drone-killing rifles will be used during the upcoming 2017 Wuhan Marathon, to raise security. Wuhan police demonstrated the drone-killing rifles last week, where they shot down six drones, according to the Chutian Metropolitan Daily. The rifles don't come cheap, at 250,000 yuan ($36,265) each, and they will have a range of roughly 1 km (0.6 miles).

American police have certainly used drones before, but not on this scale. The Los Angeles Police Commission has voted in favor of letting the LAPD fly drones in a year-long pilot program, making it the largest US police department to ever rely on the robotic aircraft. The force will use the drones for aerial searches, recon in tense situations (think: standoffs) and other tasks where officers would otherwise be at risk. The machines could save lives, according to the LAPD, but there were numerous concessions made to address privacy concerns -- and some people still aren't convinced these limits will prevent abuse.

A police drone operator was forced to steer the device away from the path of an F-15 fighter jet travelling at nearly 520mph, a report has revealed. The Devon and Cornwall officer was convinced there would be a collision as the military jet came into view and then banked right above Throwleigh, Devon, on January 16. The Airprox board, which looks into near-misses, reported the 13lbs device was flying at an altitude of around 300ft when the pilot heard a fast jet approaching. 'He descended the drone as quickly as possible,' the report said. 'The jet came into view from right-to-left and seemed to pass by the drone at the same altitude; it looked like the jet was within 200m laterally of the drone. 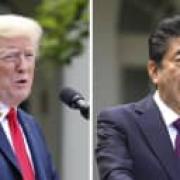 Police are investigating witness reports of a drone being flown Monday evening near the Imperial Palace and other downtown Tokyo areas, after a number of similar sightings were noted last week following the ascension of Emperor Naruhito. The flying of drones is banned in central Tokyo. Riot police observed what they thought was a drone flying over the Kitanomaru Garden located just north of the palace at around 7:30 p.m. Monday, according to the Metropolitan Police Department. Further reports were made later saying a drone had been spotted flying over Tokyo's Nagatacho district, where the country's Diet and the Prime Minister's Office are located, as well as in the Yotsuya and Roppongi areas of the city, according to the police. The police searched the areas but failed to track down the pilot.