Bracing for a Hazy Robo-Future, Ford and VW Join Forces

The autonomous driving world is about as incestous a place as Caligula's palace, and it got a little more so today, when Ford and Volkswagen announced a formal and long-anticipated alliance. "The alliance we are now building, starting from first formal agreement, will boost both partners' competitiveness in an era of rapid change," Herbert Diess, the CEO of Volkswagen, said on a call with reporters. He and Ford CEO Jim Hackett said the partnership--which is not a merger--will begin with the companies jointly developing and building medium-sized pickups and commercial vans, to debut as early as 2022. The automakers said the arrangement should "yield improved annual pre-tax operating results" by 2023. So hopefully, this makes everyone richer. 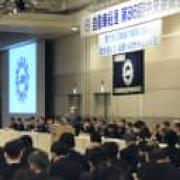 The unprecedented level of spending -- much of it by Germany's Volkswagen AG -- is driven in large measure by government policies adopted to cut carbon dioxide emissions, and will extend technological advances that have improved battery cost, range and charging time to make electric vehicles more appealing to consumers, according to an exclusive analysis of public data released by those companies. China for decades played catch-up to German, Japanese and American automakers, which dominated internal combustion vehicle technology. Now, China is positioned to lead EV development, industry executives say. "The future of Volkswagen will be decided in the Chinese market," said Herbert Diess, chief executive of VW, which has decades-old joint ventures with two of China's largest automakers, SAIC Motor and FAW Car. Speaking earlier this week to a small group of reporters in Beijing, Diess said China "will become one of the automotive powerhouses in the world."

Volkswagen CEO Herbert Diess told employees at the German carmaker on Thursday to prepare for the "revolution" needed to take on electric car pioneer Tesla and Chinese manufacturers. "In the new automotive world, we are faced with competition the likes of which Volkswagen has never seen before," Diess said in a speech at the carmaker's flagship plant in Wolfsburg. The German group -- whose 12 brands include Audi, Porsche and Skoda -- is pumping 35 billion euros ($40 billion) into the shift to electric vehicles and aims to become the world's largest electric carmaker by 2025. With VW planning to stop producing cars with internal combustion engines in Europe for its eponymous flagship brand as soon as 2033, its facilities will need to be retooled soon. Diess said he was "worried" about the Wolfsburg factory, whose future has been the subject of a fierce debate within the group, highlighting the "impressive productivity" of the new Tesla facility outside of Berlin where production is expected to begin in the next few months. 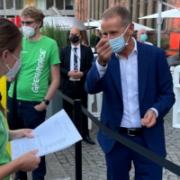 MUNICH – Volkswagen head Herbert Diess on Sunday said autonomous cars, not electric vehicles, were the "real game-changer" for the auto industry, which is facing the end of combustion engines in Europe by 2035. Diess' comments signal the pace at which the 62-year old is trying to transform Europe's largest carmaker by basically saying that the shift toward battery-powered electric vehicles, which still needs to be backed up by actual sales, was sealed. "Autonomous driving is really going to change our industry like nothing else before," Diess said in Munich ahead of the official opening of the IAA Mobility Show, adding the shift towards electrified cars was "kind of easy" in comparison. "The real game-changer is software and autonomous driving." Diess spoke as environmental pressure on the auto sector is ramping up, with the European Commission in July proposing an effective ban on the sale of new petrol and diesel cars from 2035.

Renewed talk of a merger between Volkswagen and electric vehicle maker Tesla that surfaced in earnest last year is again making news. Triggering the latest round of rumors about VW acquiring Tesla is a mysterious meeting last week between VW CEO Herbert Diess and Tesla CEO and co-founder Elon Musk. Diess and Musk met for undisclosed reasons in Braunschweig, Germany, site of VW's auto parts factory. Musk was in Germany for three days last week for other business, but rumors of a potential VW-Tesla merger were refueled by Musk test-driving VW's new ID.3 EV for the first time. Diess tried to quell speculation by posting a video of the two executives driving an ID.3 on an airfield to his Linkedin page, along with a clarification about their meeting.