Dating apps have a dick pic problem. Unsolicited lewd photos and harassment have become part and parcel of dating app culture in recent years. Bumble has decided to put its weight behind combatting the issue that has long dogged dating app users. Bumble is launching an AI tool that will warn users when they've been sent an obscene photo. SEE ALSO: OkCupid launches anti-dick pic pledge to cut down on harassment.

Dating app Badoo has launched a new safety feature that uses AI to detect unsolicited nudes that get sent through the app. Badoo, which has been described as'like Facebook but for sex', says its'private detector' has a 98 per cent accuracy rate when covering up intimate photos. The feature's AI identifies potentially offending photos, automatically blurs them and gives users a warning that they could contain'inappropriate content'. Users are then given the choice to open and view the content or block the explicit image and report it to the app's moderation team. The feature was introduced to the'feminist dating app' Bumble last year, which is owned by the same holding company as Badoo.

Dating app Bumble has banned body shaming as part of updates to its terms and conditions that come into force today. The popular app, which is known for putting'women first', defines body shaming as'unsolicited and derogatory comments about someone's appearance, body shape, size or health'. This includes any language deemed'fat-phobic, racist, colourist, homophobic or transphobic', according to Bumble. A team of Bumble moderators will be looking out for any offenders who post body shaming content on either their profile or through the app's chat function. They will also be working to identify any type of negative language such as'discouraging particular people to interact with somebody's profile'.

Wolfe Herd's app has expanded beyond dating, with features promoting female friendship and career networking.Jamel Toppin/Forbes Some users of Bumble, Whitney Wolfe Herd's dating app, are lucky enough to swipe right and find love, a new friend or a job opportunity. Wolfe Herd, though, may be the luckiest of all: The app, which Forbes values at $1 billion, has brought its 29-year-old founder a $230 million fortune. While Wolfe Herd missed the cut for this year's Forbes list of America's Richest Self-Made Women, Forbes predicts it won't be too long before she joins the ranks, assuming Bumble keeps growing at the rate it has. Bumble's biggest competitor is Tinder, founded in 2012 as one of the first "swiping" dating apps,using a customer's location to find matches. Wolfe Herd actually helped build what is now her adversary.

How Bumble is becoming the connection queen of the App Store 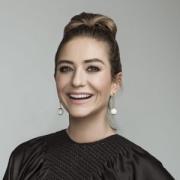 When Whitney Wolfe founded Bumble, the popular swipe-based dating app where women make the first move, she wasn't out to start a dating app revolution--she just wanted to create a way to bring accountability to the online dating realm. But the app's major boom has shown that the dating space needed a different approach. Now, as the company is in its second year, Bumble is expanding the platform to allow different kinds of connections instead of just romantic ones. Wolfe outlined plans for the app's future at South by Southwest, including many new features that are just around the corner. The idea for Bumble was born after Wolfe's messy departure from Tinder, which has a reputation of being more hookup-focused than relationship-focused. On Tinder and other sites, it's common for women to receive aggressive messages and (ahem) unsolicited photos from their matches, which might drive users away.