He was signed by the Mets from the Dominican Republic in 2018 and made his professional debut in 2019 with the Mets' Dominican Summer League team.

Citing the Hillsborough County Sheriff's Office, the Tampa Bay Times reports the agency learned Tuesday that Reginald Gambrell was driving the wrong way on a Tampa road. Deputies say Gambrell was experiencing a medical emergency at the time and drove onto a sidewalk before hitting another car. The crash caused the other driver, Holly Neider, to swerve and strike the cruiser of the responding deputy, John Duran.

Fox News Flash top headlines are here. Check out what's clicking on Foxnews.com. Dylan Gambrell scored in the third period, and the San Jose Sharks beat the Los Angeles Kings 3-2 on Saturday night for their fourth straight victory. Kevin Labanc and Evander Kane each had a goal and an assist for the Sharks, who have won six of eight overall to climb back into playoff contention. San Jose is one point behind Arizona for the final postseason spot in the West after being eight points out to start the week. 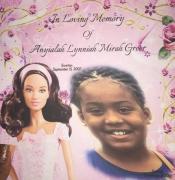 A Detroit family is demanding answers after their 9-year-old daughter died within hours of having a tonsillectomy-- the third most common childhood procedure, with 530,000 operations performed per year. The Detroit News reported that Sonia Gambrell plans to sue Detroit Medical Center, which owns Children's Hospital of Michigan, where her daughter Anyialah Greer underwent the surgery on Dec. 8 prior to suffering cardiac arrest. Although autopsy results aren't expected for weeks, medical reports suggest an obstructed airway, an undetected heart condition, or anesthesia complications may have left Greer at risk, the news website reported. Gambrell alleges the ear, nose and throat specialist who performed the surgery, Dr. Bianca Siegel, wrongfully discharged her daughter because she was not in stable condition post-surgery. I don't know how she could be considered stable when she died just hours after discharge," James J. Harrington IV, a partner with Fieger Law of Southfield who specializes in medical malpractice, whom the family hired for representation, told the Detroit News.

Since the war in Yemen began last year, getting permission to enter the country has become a complex process. A recent call to the country's embassy in D.C. was fruitless on the visa front but concluded with a recommendation: "You really must try Yemen Café, in Brooklyn. They have all the best Yemeni food there." The friendly advice of a diplomatic official is usually ignored to the detriment of the advisee, so a trip to Cobble Hill, on whose northern extremities the café perches, amid a cluster of Middle Eastern shops and restaurants, was soon conceived. Yemen Café has three rows of tables, at the end of which a television screen beams images of the owners' home country: green rolling hills, the majestic mosques and towers of Sana'a, a traditional dagger, or janbiya.