3D Printing Is the Future of Factories (for Real This Time)

Factories, the chief innovation of the industrial revolution, are cathedrals of productivity, built to shelter specialized processes and encourage the division of labor. Adam Smith, who illuminated their function on the first page of The Wealth of Nations, offered the celebrated example of a pin factory: "I have a seen a small manufactory… where ten men only were employed, and where some of them consequently performed two or three distinct operations. But the benefits of factories suggest their limitations. They are not reprogrammable: To make different products, a factory must retool with different machines. Thus, the first product shipped is much more expensive than the next million, and innovation is hobbled by need for capital expenditure and is never rapid. 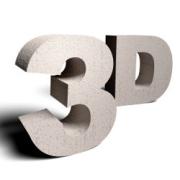 Jessie Frazelle is the cofounder and chief product officer of the Oxide Computer Company. Before that, she worked on various parts of Linux, including containers, and the Go programming language. More online: A version of this article with embedded informational links is availble at https://queue.acm.org/detail.cfm?id 3430113

When you think about 3-D printing, chances are you think of little plastic doodads created by desktop devices like those made by MakerBot. Computing and printer giant HP wants you to think about metal. Today the company announced the Metal Jet printer, an industrial-scale 3-D printer that builds items not of plastic but of steel. HP is trying to change that. In 2016, it launched its Jet Fusion plastic 3-D printer, designed for mass production rather than one-off printing.

A startup aimed at making metal 3D printing less complex and more accessible to design and manufacturing teams has garnered funding from BMW and other big-name companies as it prepares to emerge from stealth mode. Desktop Metal, based in Burlington, Mass., recently unveiled that it has raised $45 million in investments, with BMW Ventures, GV (formerly Google Ventures), and Lowe's Ventures contributing to the round. The new funding brings the total amount of equity raised by the company to $97 million since its founding in October 2015. Desktop Metal plans to use the funding to continue to develop its technology and scale production in anticipation of its official product launch later this year. Until then the company is remaining mum on the specifics of its technology, but not its overall mission, which is "to accelerate the adoption of metal 3D printing in manufacturing through the creation of innovative technology that produces complex parts at scale," said Ric Fulop, CEO and co-founder of Desktop Metal.

3D Printers: How They Work and Their Benefits

Over the last few decades, it has been making waves in many industries around the world. This describes the creation of an object by adding material to the object layer by layer. Throughout its history, additive manufacturing has gone by various names, inlcuding stereolithography, 3D layering, and 3D printing, but 3D printing is the best-known. So how do 3D printers work? The process of 3D printing begins by making a graphic model of the object to be printed.