LG's phones may be bothersome for its bottom line, but they boast a sizeable advantage for users: Quick access to Android updates. And it looks like the trend is set to continue with the company's latest beaut, the V30.

Google has started rolling out the last developer preview of Android 7.0 Nougat before the general release scheduled later this summer. This release is the fifth and final preview release, offering developers and beta testers the "near final system images" for supported Nexus devices, the Pixel C, and the General Mobile 4G Android One. Google doesn't mention support for the Sony Xperia Z3 (D6603 and D6653 models) in this preview as it has in past releases. The update gives developers the final user interface and APIs to test their apps against, and ensure they're ready for Android behaviour changes, such as the battery and memory optimisations with Doze on the Go, Google's Project Svelte background optimisations, and security related permission changes. Some of the features end-users are likely more keen to experience when using Android apps are the running apps side-by-side, new Unicode 9.0 emojis and the ability to reply directly to messages within the notifications interface.

Microsoft brings some of its Hololens smarts to Android

Hololens 2 may be right around the corner, but before then Microsoft is giving Android users a spin on its Mixed Reality platform. The company is launching its Remote Assist app on Android and Product Visualize 365 on iOS as previews this April, according to The Verge. Alas, that means they're not aimed at the general public. Unveiled last summer, Remote Assist on Hololens lets you collaborate with people while letting them see through your eyes using the headset's camera. For instance, a more experienced colleague could guide you through a problem by drawing augmented reality annotations for you to follow.

Google Announces Android 7.1 Update That Will Be Available Later This Month As An Open Developer Preview 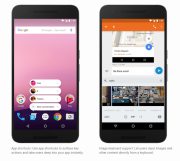 Google first released Android 7.0 Nougat in late August, and now the company is already preparing to launch its first major upgrade. Earlier today, the company has announced that the open developer preview for Android 7.1 will be available to download for the Nexus 5X, Nexus 6P and Pixel C tablet by the end of October. Android 7.1 Nougat will finally bring in support for Google's Daydream VR, the company's very own virtual reality platform built right into the mobile operating system. Developers would also finally have new SDKs and APIs that would allow them to ready their apps once the 7.1 update is released widely, Google said. The newly announced Pixel and Pixel XL smartphones will be the first devices to run Android 7.1 straight out of the box.