Streaming topped all forms of US music consumption in 2016

Remember in early 2013 when Apple hit 25 billion iTune song downloads? And Tim Cook said it took Sony 30 years to sell 220,000 Walkmans? Well, fast-forward just under four years, and Billboard has revealed that Americans streamed 431 billion songs in 2016 alone, surpassing total digital sales of songs and albums for the first time in history. In fact, folks in the US streamed more songs per day (1.2 billion) than the 734 million that were downloaded during the entire year, the ratings company said. As with similar increases in the UK, streaming increased 76 percent from last year, a figure that helped the music industry grow a solid three percent over 2015.

Apple is releasing some updates to Apple Music today that will make it easier to see what new music is on the way and when it's set to arrive. MacRumors reports that a new "Coming Soon" section is rolling out to both the iOS and macOS versions of the music streaming service and it currently shows upcoming albums from artists like Florence The Machine, Interpol and Gorillaz. To get there, go to the Browse tab, select New Music and then scroll down until you find the Coming Soon section. Tapping the albums listed will bring up additional information like the expected availability date and track listings. Expected release dates are also now available on some upcoming albums' Apple Music pages even when the albums aren't listed in Coming Soon.

'Now That's What I Call Music!' to release a Broadway album 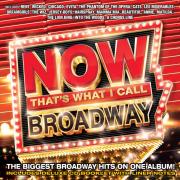 The best-selling multi-artist album series "Now That's What I Call Music!" will release its first all-Broadway CD, including hits from "Cats," ''Chicago," ''A Chorus Line," ''The Lion King," ''Wicked" and "The Phantom of the Opera." The album, set for release April 29 and featuring 18 songs usually including the original Broadway casts, will include "Seasons of Love" from "Rent," "Defying Gravity" from "Wicked," ''Sherry" from "Jersey Boys," ''When I Grow Up" from "Matilda the Musical" and "Tomorrow" from "Annie." "In curating this album, we set out to find 18 songs that represent and celebrate the rich history of Broadway from the last 40 years," Jeff Moskow, Head of A&R for "Now That's What I Call Music!" said in a statement. The series has sold more than 250 million albums worldwide. This material may not be published, broadcast, rewritten or redistributed.

Metallica announced Thursday it will release a new album on Nov. 18, its first in eight years. Called "Hardwired...To Self-Destruct," the band's 10th studio album will be the follow-up to 2008's "Death Magnetic." On its website, the band said the double-disc album with "nearly 80 minutes of music ... represents the next phase of our journey as Metallica and we are so excited to share it with you." There are a total of 12 tracks, six on each disc and a deluxe version offers a third disk "with the [14] riffs that were the origins of the album." The track listing can be found on the website.

The third artist I want to mention is Veda Hille from Vancouver, which is a bit awkward because we are pals (in Canada's relatively small music scene, this kind of thing becomes inevitable). But I admired her brilliance before we got to know each other, and in a career that goes back to the early 1990s, she's always been one of those musicians who ought to break through to a broader public yet mysteriously never quite does. Her music feels at once willful and extremely free, following her consciousness along unique and private paths, but with subtly coiled structures that often end up springing, at least for me, into vast emotion. Her latest album, Love Waves, is a change of pace from her usual piano-based, folk-rock-cabaret style. It's an analog-synth-pop album, written mostly in Berlin last year, with David Bowie and Brian Eno's 1970s collaborations there foremost in mind.