Chris Soules' attorneys are asking the court to dismiss the charges filed against the "Bachelor" alum for allegedly leaving the scene of a fatal car accident. 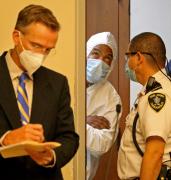 A 58-year-old homeless man was held on $20,000 cash bail on Friday, a day after police said he walked away after the pickup truck he stole hit a pedestrian by the Boston Public Garden, leaving her with life-threatening injuries. Keith Andrade, whose address is listed as homeless, was arraigned Friday in Boston Municipal Court on charges including larceny of a motor vehicle, leaving the scene of a personal-injury accident, and assault and battery with a dangerous weapon. The victim, whose name was not released, was hit after police said Andrade crashed the stolen pickup truck into the gates of the public garden. She is listed in critical condition, Boston police said. Andrade's $1,000 bail in a separate case was revoked.

Former "Bachelor" star Chis Soules pleaded not guilty to fleeing the scene of a fatal accident in an Iowa court on Tuesday. According to the documents obtained by People Magazine, Soules wrote in a written plea that he is requesting for a trial date to be set as soon as possible. The 35-year-old is facing a felony charge that carries up to five years in prison for the April 16th accident that left Kenneth E. Mosher dead. Authorities said at the time that Mosher died when Soules' truck rear-ended Mosher's tractor, throwing him into a ditch. The sheriff stated following the accident that alcoholic beverages were found at the scene and police are trying to determine who had possessed them.

Chris Soules was arrested and released following the fatal car accident he got involved on Monday. Initial reports stated that "The Bachelor" star just left the scene. However, new sources claimed otherwise. TMZ obtained and shared an audio of Chris calling 911 following the car accident that left Kenneth Mosher, 66, dead. In the recording, Chris sounded distraught and admitted that he "rear-ended-ended a guy on tractor."

'Prologue: The Crossing' short bridges'Alien' films' divide The late Jonathan Demme defied definition as an artist'The Bachelor's' Chris Soules called 911 before leaving the scene of fatal crash Chris Soules, the former "Bachelor" who was arrested earlier this week in Iowa on suspicion of leaving the scene of a fatal accident, called 911 from the scene Monday night, but reportedly wouldn't come out of his house for hours after a couple of sheriff's deputies showed up at his door. "I rear-ended a guy on a tractor," Soules told the dispatcher on a 911 recording -- obtained by the Des Moines Register and others -- breathing heavily and indicating that the "guy on the tractor" was hurt. Though there were no eyewitnesses to the crash, according to TMZ, other people got there by the time the 911 call was made. The 8:20 p.m. crash sent Soules and his pickup into a ditch on one side of the road and Kenneth Mosher and his tractor into a ditch on the other side. Mosher was transported to a hospital, where he was pronounced dead.