SoftBank, whose $100 billion Vision Fund hasn't finished raising money, is floating tentative plans for a second Vision Fund that could be about $200 billion in size, said one person familiar with the company's plans. 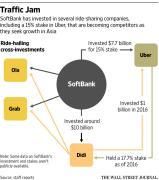 In Japan, Uber is gearing up to fight China's Didi Chuxing Technology Co., which is planning to enter the market after an investment by SoftBank of around $10 billion.

A few prominent voices in Silicon Valley are calling for the tech world to exercise greater caution in vetting its investors as disquiet builds about one of the industry's biggest backers -- Saudi Arabia -- and its role in the killing of journalist Jamal Khashoggi. The calls, while still isolated, are challenging the hush-hush world of money-raising in the startup industry, where venture-capital firms and privately owned startups disclose little about their funding and operations. "It is time for all of us in the startup and VC sector to do a deep dive on our investor base," Fred Wilson, the influential founder of Union Square Ventures, a New York City-based venture capital firm with strong ties to the Valley, argued in a blog post Sunday. "Who are our investors and can we be proud of them?" "It will be a real moral challenge for anyone to accept money moving forward from Saudi Arabia," said Venky Ganesan, a partner at technology investor Menlo Ventures, which invested in Uber and Warby Parker, and former chairman of the National Venture Capital Association. So far in public, the tech community is largely staying quiet -- reflecting the difficulty of undoing some investments and the traditionally discrete nature of the Valley's many non-public companies and funds, industry experts say.

How Softbank, World's Biggest Tech Investor, Throws Around Its Cash

Mr. Son paid it anyway. And he continued a buying spree, picking up stakes in dozens more companies, many of them "unicorns"--startups that have grown to valuations over $1 billion--such as Uber Technologies Inc. and WeWork Cos. In some of those deals, too, he had to argue with directors and advisers who thought he was paying too much.