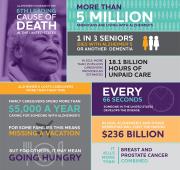 A handful of startups are employing artificial intelligence technologies and big data in an attempt to diagnose dementia, particularly Alzheimer's disease. The effort could lead to better interventions and even therapeutic drugs if it becomes possible to detect cognitive decline before it really starts. The benefits to society – not to mention market potential – for the early detection of dementia and Alzheimer's disease are huge. According to the World Health Organization, there were 47.5 million people worldwide with dementia in 2015, with 7.7 million new cases each year. The total number of people with dementia is projected to reach 75.6 million in 2030 and almost triple by 2050 to 135.5 million.

The algorithm -- which accurately predicted probable Alzheimer's disease 84 percent of the time -- could be particularly useful in selecting patients for clinical trials for drugs intended to delay disease onset, said lead study author Sulantha Sanjeewa, a computer scientist at McGill University in Canada. "If you can tell from a group of of individuals who is the one that will develop the disease, one can better test new medications that could be capable of preventing the disease," said co-lead study author Dr. Pedro Rosa-Neto, an associate professor of neurology, neurosurgery and psychiatry, also at McGill University. The technology is still in its early stages, but the findings suggest that AI analysis of brain scans could offer better results than relying on humans alone, Rosa-Neto told Live Science. The findings are detailed in a new study, which was published online in July in the journal Neurobiology of Aging. But if people who are selected for the trial never develop Alzheimer's during that time, it's impossible to say whether a drug was effective, he said.

Alzheimer's disease is notoriously difficult to diagnose -- the only way doctors can tell for sure that a patient has the deadly neurodegenerative condition is to examine his or her brain during an autopsy after death.

New research into the genetic underpinnings of Alzheimer's disease offers fresh evidence that the devastating brain disorder may gain a foothold years before dementia sets in, and takes a key step toward earlier detection of the disease. In a study that scoured the genes of healthy young people for the presence of variants linked to Alzheimer's disease, researchers have found that those who carried many of the telltale gene variations had a smaller hippocampus -- a brain structure that is crucial to memory-formation – than did their peers with few of the genetic variations. While statistically significant, the association was somewhat weak. But it was clearly detectable in cognitively healthy study participants who were still very young-- between 18 and 36 years old. When a large population of older study participants without dementia underwent the same broad genetic query, the test was able to distinguish those with poorer memory and cognitive function from those whose mental faculties were still strong.

Diagnosing Alzheimer's disease (AD) is challenging, time consuming, and costly. Currently, there is no single test, or series of tests, that can determine with 100% certainty whether an individual has developed AD. In fact, AD cannot be definitively diagnosed until after death, when the brain can be closely examined for certain microscopic changes caused by the disease. When an individual reports to a doctor that he or she has experienced bouts of memory loss or decreased cognitive function, he or she may be assessed using a variety of cognitive and physical tests, some quite invasive, to determine whether he or she "probably" has AD. However, this diagnosis requires visible symptoms that may only show up when it is too late to start preventative measures.