The study of register in computational language research has historically been divided into register analysis, seeking to determine the registerial character of a text or corpus, and register synthesis, seeking to generate a text in a desired register. This article surveys the different approaches to these disparate tasks. Register synthesis has tended to use more theoretically articulated notions of register and genre than analysis work, which often seeks to categorize on the basis of intuitive and somewhat incoherent notions of prelabeled 'text types'. I argue that an integration of computational register analysis and synthesis will benefit register studies as a whole, by enabling a new large-scale research program in register studies. It will enable comprehensive global mapping of functional language varieties in multiple languages, including the relationships between them. Furthermore, computational methods together with high coverage systematically collected and analyzed data will thus enable rigorous empirical validation and refinement of different theories of register, which will have also implications for our understanding of linguistic variation in general.

'It's an educational revolution': how AI is transforming university life

Beacon is unlike any other member of staff at Staffordshire University. It is available 24/7 to answer students' questions, and deals with a number of queries every day – mostly the same ones over and over again – but always stays incredibly patient. That patience is perhaps what gives it away: Beacon is an artificial intelligence (AI) education tool, and the first digital assistant of its kind to be operating at a UK university. Staffordshire developed Beacon with cloud service provider ANS and launched it in January this year. The chatbot, which can be downloaded in a mobile app, enhances the student experience by answering timetable questions and suggesting societies to join.

things you need to know about artificial intelligence -Obiaks Blog

The next big thing in the technology world is artificial intelligence (AI). Big tech organisations like Apple and Google are aggressively investing in AI. Google has been partnering Oxford University to expand Artificial Intelligence. Some examples of everyday AI include iPhone Siri and Microsoft Windows 10 Cortana. Before going further, it will not be out of place to define AI.

Jacob Katuva used to get up at dawn to cycle 12 miles from his village to collect water with his uncles and cousins when he was growing up in Kenya. Now he is part of a research team at the University of Oxford using cloud computing and mobile sensors to monitor water wells and help ensure that thousands of villages in rural Africa and Asia have a safe, secure supply of water. The time spent finding and carrying water, if local wells are not reliable, steals precious time from farming, making a living or going to school. It can even force people to revert to unsanitary water sources shared with animals. Water issues are tied to a cycle of poverty. 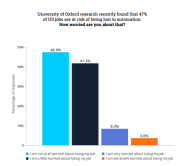 Recently, tech leaders including Tesla CEO Elon Musk and billionaire Bill Gates warned about robots taking over jobs. However, a new report shows people are not that concerned about job automation. The report The Robots Are Coming, But Not For Me, is based on an online survey of more than 2,000 adults commissioned by consumer engagements firm LivePerson last month. Although experts agree robots, artificial intelligence and automated technology will have at least some effect on global economies, the majority of people think they'll be alright but say other professionals will be affected by mass layoffs, the report found. Among those surveyed, a high 88 percent said they were not very worried about losing their job after they were told about an Oxford University study that said 47 percent of US jobs were "highly likely" to be replaced by technology.