New Yorkers pass a shattered storefront window on W. 23rd St. in Manhattan, Tuesday, Sept. 20, 2016, in New York. The window was hit by shrapnel from the terrorist bomb that exploded across the street Saturday evening. An Afghan immigrant wanted in the bombings was captured Monday after being wounded in a gun battle with police. 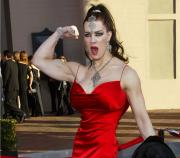 The wrestling star and actress known as Chyna was found dead Wednesday in her Redondo Beach home, three days after posting a rambling and sometimes incoherent video on YouTube. In the 13-minute video posted to her YouTube channel on Sunday, a groggy Chyna, whose real name was Joan Marie Laurer, walks around a beach-side residence talking to herself. She wears headphones and feathers in her hair and speaks in slurred language as she makes herself a smoothie and talks about the vitamins she's taking. "So passive aggressive," Chyna says after looking through the refrigerator. I'm having fun because I feel like I can express myself."

This is a 'beginner' trail? Testing acumen and bravery in the mountain biking destination of Moab, Utah

When Thelma and Louise drove their T-Bird off a cliff in the final seconds of the same-titled movie, audiences thought it was into the Grand Canyon. But as epic as that giant chasm looked, the characters were driving off a cliff in Dead Horse Point State Park, about 30 miles southwest of here. I was in the park a year ago, accompanied by my husband, Chris, as part of a small guided group about to sample what this mountain biking destination had to offer. For the uninitiated, Moab, along with places such as Bend, Ore., and Crested Butte, Colo., is one of the country's preeminent mountain biking locales owing to its dry climate, awe-inspiring terrain and vistas, and several excellent bike tour and rental outfits. Hardcore mountain bikers will think of Slickrock Trail or the White Rim Trail (the road used by the movie outlaws above), a 100-mile four-wheel-drive route adopted as a multi-day trek by thrill-seeking cyclists immune to 100-degree temps during the region's brief but undeniable summer.

Like super-rugged mountain biking? Four of the toughest rides of your life

Rugged mountain bikers who have Iceland, Peru, Switzerland or British Columbia on their radar, take note. Trek Travel, an active vacation company specializing in cycling vacations, has teamed up with Canadian-based Big Mountain Bike Adventures to off-road bike tours to these hilly climes. Each mountain-biking excursion will feature a maximum of 10 guests, with two guides per trip, and includes full suspension Trek mountain bikes at no additional charge. The Iceland trip lasts six days and will lead riders over rolling hills and mossy lava fields, by steaming fumaroles and bubbling hot mud baths, to spend nights in back-country huts. Set along the remote and rugged south coast of Iceland, mountain bikers will be able to take mid-ride dips in hot springs and natural warm rivers.