A Study Finds Sex Differences in the Brain. Does It Matter?

For Armin Raznahan, publishing research on sex differences is a fraught proposition. Now chief of the section on developmental neurogenomics at the National Institutes of Health, Raznahan learned early that searching for dissimilarities between men's and women's brains can have unintended effects. "I got my fingers burned when I first started," Raznahan says. During his PhD, he published a study that examined structural differences between men's and women's brains and how they changed with age. "We observed a particular pattern, and we were very cautious about just describing it, as one should be, not jumping to functional interpretations," he says. Despite his efforts, The Wall Street Journal soon published an article that cited his study in a defense of single-sex schooling, under the assumption that boys and girls must learn in distinct ways because their brain anatomy is slightly different.

In primates such as humans, living in cooperative societies usually means having bigger brains -- with brainpower needed to navigate complex social situations. But surprisingly, in birds the opposite may be true. Group-living woodpecker species have been found to have smaller brains than solitary ones. Cooperative societies might in fact enable birds to jettison all that brainpower otherwise needed on their own to constantly out-think, outfox and outcompete wily rivals, say researchers. Socialism in birds may therefore mean the individuals can afford to get dumber. 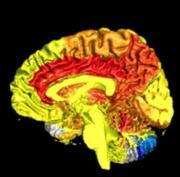 The brains of men and women really are different, with certain regions of the female brain being more active than male ones, according to new research. According to a study in the Journal of Alzheimer's Disease, researchers used a special kind of CT scan that, in addition to taking 3-D images of the brain's anatomy, also gets a picture of biological activity, like blood flow, in a subject. The California-based team studied the brain scans of dozens of healthy people and more than 26,600 psychiatric patients to identify differences between males and females, finding that the sexes had varying brain function in both the healthy population and the patient population. Read: Which Words Do Men vs. Women Find Funny? The patients whose brains had been scanned had conditions as varied as schizophrenia, attention deficit hyperactivity disorder, bipolar disorder and brain trauma, journal publisher IOS Press reported.

People with larger brains also have better memory, logic and reactions, scientists have found. The major discovery follows 200 years of research which attempted to find a link between brain size and cognitive performance. MRI scans revealed the link as scientists studied 13,600 people in the largest study of its kind ever undertaken. Researchers from the US and Netherlands compared brain size from MRI scans with cognitive performance and educational achievements. The results of the study, published in the journal Psychological Science, are the most comprehensive example of this type of investigation and is the largest of its kind.

THERE is something special about the human brain. Yes, it contains 86 billion neurons and billions of other cells, and yes, it is arguably more complicated than anything else we have discovered in the universe. But more than that, our brains make us who we are. They keep us alive and functioning, while storing our thoughts and memories, shaping our behaviours, relationships and our lives. Perhaps that is why it is so remarkable to hear that some people are living with only half a brain.