It was supposed to be a record breaking day for space launches with four rockets blasting off, and the latest round in the battle of the space billionaires. However, both Elon Musk's SpaceX and Blue Origin, the space firm set up by Amazon's Jeff Bezos, were forced to cancel launched within minutes of each other this morning. Arianespace's Soyuz launch has also been delayed 24 hours due to high-altitude winds above the launch site, leaving just ULA's Delta IV Heavy to blast off later today. SpaceX's Falcon 9 rocket, carrying a roughly $500 million global positioning system (GPS) satellite built by Lockheed Martin Corp, was due to take off from Florida's Cape Canaveral shortly after 9:30 a.m. Arianespace's Soyuz was due to blast off from Blue Origin was due to bring its New Shepard vehicle back to Earth for a landing after launch to recover all the data collected (and, of course, the rocket itself).

Private space firm Blue Origin successfully launched and landed for the third time an unmanned suborbital rocket capable of carrying six passengers, taking another step on its path in developing reusable boosters, the company said on Saturday. The New Shepard rocket and capsule blasted off from a launch site in West Texas on Saturday at an undisclosed time, and landed minutes later back at a landing pad, the company, headed by Jeff Bezos, said. The capsule, which was flying autonomously, parachuted to a nearby site and was recovered, the company said. 'Flawless BE-3 restart and perfect booster landing,' Bezos wrote on Twitter. Blue Origin declined to comment on the test but said on Twitter, 'Congrats Blue team on today's (flight)!' Saturday's flight marks the third successful launch-and-land for the rocket, with similar missions completed in January and November.

Can Jeff Bezos pull it off a THIRD time? Blue Origin to launch its reusable rocket again tomorrow in toughest test flight yet 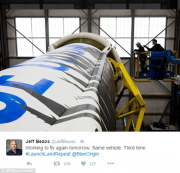 Will Bezos's Blue Origin be the first company to send tourists to space?

Blue Origin, owned by Amazon chief executive officer Jeff Bezos, completed Sunday its fourth successful unmanned launch and landing of its reusable New Shepard rocket. The suborbital flight is months ahead of SpaceX's fourth test of its reusable rocket, which owner Elon Musk announced less than two weeks ago. Blue Origin, SpaceX, and Virgin Galactic, owned by Mr. Bezos and Mr. Musks's fellow billionaire Richard Branson, are vying to be the first private company to bring people to space. As a new space race plays out, these private space companies and other unorthodox contenders such as India are lowering the cost of space travel. Blue Origin was the first private space company to feature a reusable rocket that entered space and landed again, as The Christian Science Monitor's Corey Fedde reported in January.