A robot has heard sounds through the ear of a dead locust in a world's first experiment that uses the Ear-on-a-Chip method to create a long-lasting sensory device. A team from Tel Aviv University announced their new'Ear-bot' that replaces an electronic microphone in a bio-hybrid robot with the insect's ear, allowing the machine to receive electrical signals from the environment and respond accordingly. The result is extraordinary, according to researchers, as when they clap once, the dead insect's ear hears the sound, the robot interprets the pulse and moves forward. Although the experiment seems bizarre, the team conducted the test to understand how biological systems, specifically sensory ones, can be more integrated into mechanical systems. To create the Ear-on-a-Chip, the team placed the insect's ear and nerve in an aquatic environment that allowed air and sound to flow through.

7 amazing robots based on animals 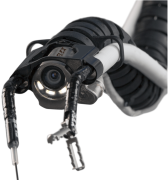 When it comes to robots, science fiction has conditioned us to think of androids – bipedal machines approximating the human form. But the next generation of robots may be based on very different types of animals: snakes, flies, locusts and even the multi-tentacle octopus. Israeli scientists are hard at work on just such contraptions. Here's a look at seven of the most fascinating designs that can help with everything from exploring our insides to cleaning up the mess we make on the planet. Medrobotics' signature product, the Flex Robotic System, allows physicians to reach deep into the body with minimal risk.

Scientists have created a revolutionary technology that could save countless lives by preventing car crashes, and it is inspired by locusts. The insects have an early warning system which helps them avoid colliding with each other when flying in swarms at high speed. Researchers have adopted key features of the locusts' system to develop a computer system which could become a blueprint for highly-accurate collision sensors in cars. Scientists at the University of Lincoln created a collision sensor for cars (pictured) after being inspired by locusts' anti-collision systems Professor Shigang Yue and Dr Claire Rind of the University of Lincoln were inspired by the unique way locusts process electrical and chemical signals in their brain. Professor Yue said: 'We created a system inspired by the locusts' motion sensitive interneuron - the lobula giant movement detector.

Washington University to train locusts to 'sniff out explosives'

Dogs may be man's best friend when it comes to sniffing out bombs at airports, but they could one day be replaced by cyborg'insects'. Engineers hope to exploit the locust's incredible sense of smell to create robotic'noses' inspired by the insects that could be used by homeland security officers. The system would be capable of picking out certain smells from a jumble of other scents, just like locusts can do. To come up with a man-made equivalent of the locust's sense of smell, the experts will monitor neural activity from an insect's brain while it's exploring its surroundings and work out how it decodes the smells present As a swarm increases in size, the locusts in it are more likely to stay on course. In a small group, the researchers found that locusts don't really interact.