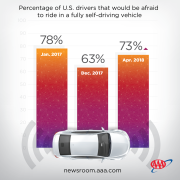 For a while, people were really excited about the potential of self-driving cars, which promised to make our future commutes easier, more productive, and safer. Then came some high-profile autonomous vehicle accidents -- including two fatal crashes -- and let's just say the excitement has waned a bit. SEE ALSO: Tesla's Autopilot fails haven't shaken my faith in self-driving cars. A new survey released Tuesday by the American Automobile Association found that 73 percent of American drivers are scared to ride in an autonomous vehicle. That figure is up 10 percent from the end of last year.

Nearly three-quarters of Americans are afraid to ride in self-driving cars, according to the latest survey by the American Automobile Association. There is bad news ahead for the many automobile and technology companies currently developing, and road-testing, self-driving cars: many people are too frightened to ride in driverless vehicles. The American Automobile Association (AAA) May consumer trust survey on autonomous vehicles (AVs) found that 73% of U.S. citizens now fear traveling in an AV, compared with 63% just six months before. In addition, the survey found that two-thirds of millennials--a supposedly tech-loving generation--are also too fearful to ride in self-driving cars. The AAA even has unwelcome news from pedestrians and cyclists, with nearly two-thirds saying they don't trust AVs enough to use roads and sidewalks alongside them.

Would YOU get in a self driving car? 75% of Americans wont

While technology firms rush to put self driving cars on the roads, a new study has revealed one problem - people could be too scared to get in them. A new report from AAA found that three-quarters of Americans reported feeling afraid to ride in a self-driving car, while and only 10 percent said that they'd feel safer sharing the roads with driverless vehicles. However, it also discovered 59% were keen to have some self driving technology in their next vehicle. The AAA report said 59% of drivers were, however, keen to have some self driving technology in next vehicle, although it found just 10% said they'd feel safer sharing roads with driverless cars'A great race towards autonomy is underway and companies are vying to introduce the first driverless cars to our roadways,' said Greg Brannon, AAA's director of Automotive Engineering and Industry Relations. 'However, while U.S. drivers are eager to buy vehicles equipped with autonomous technology, they continue to fear a fully self-driving vehicle.'

How do you get people to trust autonomous vehicles? This company is giving them 'virtual eyes.'

One of the biggest challenges facing car companies developing driverless vehicles has little do with sophisticated robotics or laser technology. Instead, they must figure out how to engineer something far more amorphous but no less important: human trust, the kind that is communicated when human drivers and pedestrians make eye contact at a crosswalk. Surveys indicate that large portions of the public harbor deep reservations about the safety of self-driving technology, so Jaguar Land Rover enlisted the help of cognitive psychologists to unpack "how vehicle behaviour affects human confidence in new technology," the British automaker said in a news release. Its solution for answering that question: virtual eyes, a large cartoonish pair that bring to mind the plastic googly eyes you probably glued onto projects in elementary school. The eyes have been fitted to autonomous vehicles known as "intelligent pods."

Autonomous Vehicle Support is Revving Up - Your AAA Network

Smart car (HUD), Autonomous self-driving mode vehicle on metro city road iot concept with graphic sensor radar signal system and internet sensor connect. Also known as autonomous vehicles, cars and trucks with self-driving capabilities are becoming increasingly prevalent in the new car market. Features like adaptive cruise control with low-speed follow, which can slow a vehicle and even bring it to a stop while leaving cruise control engaged, are found on Mazdas, Hondas and other makes that sell millions of new cars every year. The success of these features has apparently persuaded some drivers to change their tunes about self-driving cars. The latest AAA Autonomous Vehicle Consumer Survey found that the number of U.S. drivers who say they are afraid to drive in self-driving cars has declined from 78 percent to 63 percent over the last year.