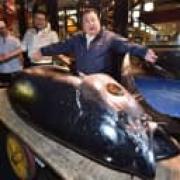 The number of traffic deaths in Japan in 2018 fell by 162, or 4.4 percent, from the previous year to 3,532, hitting the lowest level since data became available in 1948, the police said Friday. The decrease reflected police efforts to step up traffic safety education programs and crack down on traffic offenses, the National Police Agency said. The annual number of traffic deaths peaked at 16,765 in 1970 before falling gradually. The government aims to reduce the figure to 2,500 or less by 2020. The 2018 data showed that among people 65 or older, traffic deaths dropped by 54, or 2.7 percent, to 1,966 on a preliminary basis, slipping below 2,000 for the first time since 1985, when the figure stood at 1,957. 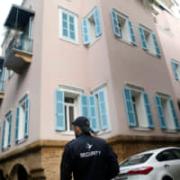 The number of deaths in traffic accidents across Japan last year fell to 3,215, the fewest since officials started compiling comparable data in 1948, according to a National Police Agency report. The number fell by 317, or 9.0 percent, from 2019, the NPA said Monday. By prefecture, Chiba saw the most fatalities at 172. Aichi, which had topped the death toll list 16 years in a row until 2018, came in second with 156, followed by Hokkaido with 152. Among people aged 65 or older, the number of traffic deaths dropped by 184, or 9.4 percent, to 1,782, the NPA said.

NPA says number of traffic deaths fell to below 3,700 in 2017 after rules were strengthened 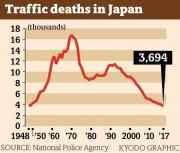 Japan's traffic death toll dropped to a record low of 3,694 in 2017, due partly to strengthened traffic regulations, the National Police Agency said Thursday.

Policewomen in Aichi Prefecture, which has had the highest number of traffic fatalities nationwide for the past 14 years, have teamed up to offer safety seminars for elderly people, children and others who are often the victims of such accidents. The team, named Ayumi and established in 2003, includes 24-year-old Maiko Sato, its youngest member, who joined at the end of last year. But Sato became more determined at her job after her 22-year-old brother was severely injured when a car hit his motorbike two months before she began her current post. He was hospitalized for about two months. "Even if it is a street that you're familiar with, remember to stop, look and wait," Sato said during a lecture to 70 elderly residents in Kariya, Aichi Prefecture, last month.

A smartphone app has been designed to convince Japanese drivers to avoid checking their handsets while driving by offering them free coffee. If motorists ignore their phones for the next 60 miles, they will receive a free cup of coffee. The initiative is in the Aichi Prefecture, which is about 150 miles from Tokyo. The area has the worst figures for accidents causing injuries and deaths in Japan and road safety campaigners believe this is down to the growing use of handheld devices. Some 50,000 people in the region were arrested last year for using their phones while driving.