BISMARK, NORTH DAKOTA – North Dakota stands to gain more than $110 million annually in tax revenue after oil begins coursing through the Dakota Access pipeline, an analysis by The Associated Press shows. The calculation shows the potential payoff for a state whose officials have supported the pipeline despite concerns from Native American tribes and other opponents who fear it could harm drinking water and sacred sites. The money the state stands to make in just one year far outstrips the $33 million in costs to police a section of the pipeline that's been the subject of intense and sometimes violent protests over the last year. "The amount of the windfall to the state doesn't surprise me at all," said Payu Harris, an American Indian activist and pipeline opponent. "That's why the state of North Dakota expended the resources they did."

BISMARCK, N.D. – North Dakota leaders agreed Tuesday to borrow another $4 million to cover the escalating costs of policing protests at the Dakota Access pipeline and slammed the federal government for not chipping in part of the funding. The state has now run up a $10 million line of credit for law enforcement costs after an emergency spending panel headed by Gov. Jack Dalrymple voted to borrow the additional funds from the state-owned Bank of North Dakota. Dalrymple said officials have asked for contributions from the federal government, the pipeline company, an American Indian tribe, "and any entity we can think of." So far, North Dakota and the local governments it backs have shouldered most of the law enforcement expenses -- even paying for officers from other states that have assisted North Dakota during the protests. More than 400 people have been arrested since August at the North Dakota portion of the pipeline, which also crosses through South Dakota, Iowa and Illinois.

35 states and DC back bid to collect online sales taxes

With the opening of two new distribution centers, Amazon will begin to charge Florida customers sales tax on items. SIOUX FALLS, S.D. -- Thirty-five state attorneys general and the District of Columbia this week signed on to support South Dakota's legal bid to collect sales taxes from out-of-state Internet retailers. South Dakota is asking the U.S. Supreme Court to review whether retailers can be required to collect sales taxes in states where they lack a physical presence. The case could have national implications for e-commerce. The state is seeking to overturn legal rulings issued mostly before the online shopping boom that hamstring officials who want to collect sales taxes from out-of-state retailers.

Should you pay sales tax on Internet purchases? South Dakota law could be the test

A new South Dakota law may end up determining whether most U.S. residents are required to pay sales taxes on their Internet purchases. The South Dakota law, passed by the Legislature there in March, requires many out-of-state online and catalog retailers to collect the state's sales tax from customers. The law is shaping up to be a legal test case challenging a 25-year-old U.S. Supreme Court ruling that prohibits states from levying sales taxes on remote purchases. Unless courts overturn the South Dakota law, it will embolden other states to pass similar Internet sales tax rules, critics said. The law could "set the course for enormous tax and administrative burdens on businesses across the country," Steve DelBianco, executive director of e-commerce trade group NetChoice, said in a statement. 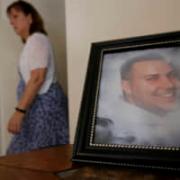 PINE RIDGE, SOUTH DAKOTA – A 16-year-old climate activist who garnered international attention when she scolded world leaders at the United Nations is visiting American Indian reservations in the Dakotas to talk about oil pipelines. Greta Thunberg is appearing at panel discussions on the Pine Ridge Reservation in South Dakota at 5 p.m. Sunday and on the Standing Rock Reservation in North Dakota on Tuesday. The Lakota People's Law Project says Thunberg is concerned about the proposed path of the Keystone XL pipeline through South Dakota, as well as plans to double oil flowing through the Dakota Access pipeline in North Dakota. Thunberg traveled to the United States in August on a sailboat to promote her climate change campaign.