Fox News Flash top headlines are here. Check out what's clicking on Foxnews.com. Three Wichita police officers were injured by a "possible explosion" after being dispatched to a residence around 4 p.m. on Saturday. Two of the officers have minor injuries and the third is in serious but stable condition. All three were transported to a local hospital for treatment.

KANSAS CITY, MISSOURI – Police in Los Angeles have arrested a man they suspect made a hoax emergency call that resulted in a SWAT police officer fatally shooting a man at the door of his own home in Kansas, law enforcement officials said Saturday.

Fox News Flash top headlines are here. Check out what's clicking on Foxnews.com. A Kansas police officer was in critical condition and a 56-year-old high school basketball coach was also hospitalized with gunshot wounds Friday after a dispute broke out in a small city northwest of Wichita. A 40-year-old suspect was taken into custody more than three hours after the shooting after he barricaded himself in a nearby home, according to reports. The Kansas Bureau of Investigation identified the suspect as Adam Hrabik, reports said. 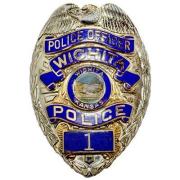 A police officer in Wichita, Kansas, is on administrative leave after a shot he fired at a dog Saturday night allegedly fragmented and ricocheted into a 9-year-old girl's forehead, the Wichita Eagle reported.

Wichita police believe the call was a case of'swatting,' in which a false report is made to get a SWAT team to descend on an address. A suspected "swatter" from California whose fake emergency call allegedly led to a Kansas man's death last year faces 46 new federal charges for fake reports of bomb threats, shootings and other acts of violence, authorities said. The charges were filed against Tyler Barriss, 25, of Los Angeles, on Wednesday in the Central District of California. Prosecutors allege Barris called in several false threats to law enforcement agencies between 2014 and 2017 from Los Angeles, the Wichita Eagle reported. Barriss plans to plead guilty to the charges, according to a signed court document, the paper reported.