ROOBO, a fast-growing hardware and AI startup headquartered in Beijing, today unveiled a prototype of its newest product, a "pet robot" called Domgy. For the unfamiliar, ROOBO is the company behind Pudding, a voice-controlled, educational robot for kids. Pudding is used to teach kids vocabulary, geography, jokes and more. The company also makes the Idealens virtual reality headset, Skyseries drone and Runbone earbuds. Since its founding in 2014, ROOBO has grown to 300 employees, with 7 worldwide offices, including one in Seattle.

Domgy, the robot dog that hopes to breathe new life into AI pets

Man's best friend is about to get a major upgrade--but don't expect this dog to eat your homework. Roobo, a Chinese artificial intelligence startup, recently pulled back the curtain on an artificial intelligence-powered "pet robot" named Domgy. An affectionate anagram of the phrase "my dog," Domgy could be yanked from an episode of the classic "Jetsons" cartoon--even though his functions are more like robotic housekeeper Rosie than the family's pet dog Astro. The beauty of Domgy, however, is that he won't require long walks, feedings or bathroom breaks. He's the latest is a line of cyber pets that were once heralded as the wave of the future before losing popularity.

Artificial Intelligence (AI) is much more than the thinking, feeling robots often portrayed in pop culture. "Artificial intelligence is basically trying to have machines make sense, learn, and interface with the external world, without requiring programming by human beings," said Nidhi Chappell, Director of Machine Learning at Intel, and the applications for the tech are seemingly endless. From autonomous cars taking over our commutes to artificially intelligent robots teaching in our classrooms, AI technology is a major talking point right now in terms of how it is impacting the world of people. Less discussed are the ways in which AI is being used in relation to animals, but several companies and creators are merging artificial intelligence with the animal kingdom in unique ways. Every day, an estimated 96 African elephants are killed by poachers eager to strip the animals of their valuable ivory tusks.

I think that is the main reason for getting acknowledgement from the jury. 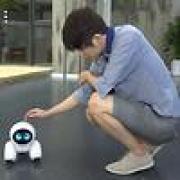 The country is hoping to use the technology to transform a variety of industries, including manufacturing, health and transport. Hundreds of gadgets and must-have electronic devices were on display at Shanghai's Consumer Electronic Show, or CES Asia. Among them was a driverless car powered by Baidu's Project Apollo self-driving car platform. The tech giant is using machine-learning, a new step in artificial intelligence, to develop the technology. Machine-learning allows computers to learn without being explicitly programmed.