NEW YORK – Asia Society, a New York-based international exchange group, announced its 2017 list of Asia Game Changers on Tuesday, including Tadashi Yanai, founder of Fast Retailing Co., which runs the Uniqlo clothing store chain around the globe. Yanai, who serves as chairman, president and chief executive officer of the company, was picked for "making philanthropy fashionable," the group said in a statement. The Uniqlo chain has donated 20 million articles of clothing to refugees in a total of 62 countries and regions, cooperating with the U.N. High Commissioner for Refugees, Asia Society said, adding that Yanai has personally contributed $10 million to help the UNHCR respond to various humanitarian crises. Also on the 2017 list of Asia Game Changers, or those "making a transformative and positive difference for the future of Asia and the world," are seven individuals and one organization. Among them is young female rapper and activist Sonita Alizadeh, who uses rap music to "empower the girls of Afghanistan."

The New Frontier That Could Outrun AI And Blockchain: Real Estate Tech

Why does our largest industry arguably hold the title for the least innovative? As the CEO of a proptech company, I've seen more and more startups bringing technology to real estate and making selling, buying and managing properties easier than ever. Venture capitalists may be starting to see dollar signs. First, let's understand what real estate tech is. You've heard of Fintech, but what is Proptech?

These are some of the quandaries you may be faced with in 2018, according to the experts who appeared on SAP Game-Changers Radio 2018 Predictions, presented by SAP. The first installment of a five-part series, the show aired live December 6, 2017. 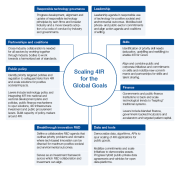 We identified existing applications being deployed today and so-called "moonshots" – Fourth Industrial Revolution-enabled game-changers in the R&D phase, that if cracked could, in the coming 5 to 10 years, provide a step-change in achieving specific goals. From quantum-computing determined optimal carbon capture materials, through to AI-enabled development of new antibiotics to address microbial resistance to current antibiotics, we showcase breakthrough innovation quests where technologists and governments alike can focus research and investment effort. Some will work, others won't, but it's time to turn the ingenuity and resources of technology towards the breakthrough solutions that might bring us closer to achieving an inclusive, net-zero emissions future.

Six AI Strategies – But Only One Winner Summary: The results are in. There is only one demonstrably successful strategy for creating big wins for AI-first companies. We'll briefly summarize the other contenders that have fallen by the wayside and then lift the curtain on the winner. For the last three years we've been close observers of exactly what makes a successful AI/ML strategy. In addition to our own observations we've been listening closely to VCs and how they describe their internal process for deciding who to fund.