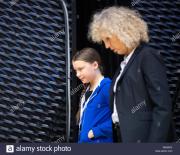 Prime Minister Shinzo Abe met Ukraine President Petro Poroshenko in Tokyo on Wednesday and reaffirmed that Japan is committed to resolving the crisis in Crimea, adding that it will bring the issue to the Group of Seven summit next month. The prime minister's comments allude to Japan's need to keep relations with the United States balanced, even as Abe hopes to make an unofficial visit to Russian in May to make progress on a territorial dispute with Russia. At the joint news conference, Abe said Japan urged Ukraine to fully implement the Minsk agreement. The original Minsk cease-fire deal was reached between Ukraine and Russia in September 2014, six months after Moscow annexed Crimea. But it failed within days of the signing with the resumption of sporadic clashes.

UNITED NATIONS (Reuters) - French President Emmanuel Macron hit back at U.S. President Donald Trump on Tuesday staunchly defending the "good" Iran nuclear deal saying that those who did not respect it were irresponsible.

Will the US withdraw from the 2015 Iran nuclear deal?

France and the United States have a long history that goes back centuries. From the American revolutionary war to the Statue of Liberty - the two countries have had strong cultural and political ties. French President Emmanuel Macron is hoping to build on that special bond during his three-day state visit to Washington, DC. And US President Donald Trump has rolled out the red-carpet. But beyond the handshakes, smiles and lavish ceremonies, there are serious policy disagreements, including the 2015 Iran nuclear deal, which could threaten to put a strain on the special relationship.

Since reports first surfaced that hackers targeted more than a dozen American energy utilities, including a Kansas nuclear power plant, the cybersecurity community has dug into the surrounding evidence to determine the culprits. Without knowing the perpetrators, the campaign lends itself to a broad range of possibilities: a profit-seeking cybercriminal scheme, espionage, or the first steps of hacker-induced blackouts like the ones that have twice afflicted Ukraine in the last two years. Over the past weekend, US officials solved at least part of that mystery, revealing to the Washington Post that the hackers behind the utility attacks worked for the Russian government. But that attribution raises a new question: Which of the Kremlin's hackers groups attempted the power grid intrusions? Russia, after all, is perhaps the only nation in the world with multiple known hacker teams that have targeted energy utilities for years.