What happened to Nicaragua's democracy?

Nicaragua has been in turmoil since the flare-up of protests against Ortega in April. Hundreds of people have been killed and thousands more have fled the country. The government, however, describes the protests as an attempted coup. The country's Vice Minister of Foreign Affairs, Valdrack Jaentschke, says the unrest was "perpetrated by a group of very radical and very violent activists". He added that human rights groups feed off misinformation.

Infographic: The State of Democracy Around the World 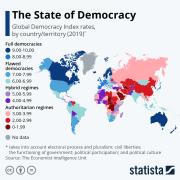 The Economist Democracy Index rates countries on the state of their governing system each year. In the latest installment published today, 22 countries in the world were rated as "full democracies," including all Scandinavian countries, several Western European nations as well as Canada, New Zealand, Australia, Mauritius, Costa Rica and Chile, which joined the top group in 2019 together with France and Portugal. Malta dropped out of the full democracies section. Another country which saw its ratings drop in the past year was Iraq, which left the "hybrid regime" category and became authoritarian. India and China also were rated lower in 2019.

BEIJING – China says a five-year prison sentence handed down to a Taiwanese pro-democracy activist who held online political lectures and helped the families of jailed Chinese dissidents was arrived at partly due to the "degree of harm to society."

Is Europe's far right a threat to democracy?

From France's National Front to Germany's Alternative for Germany (AfD), to the neo-Nazis of Golden Dawn in Greece, far-right populists are grabbing the headlines and seem to be on the rise across Europe.

US no longer a 'full democracy,' report claims

The United States may no longer be the bastion of democracy its citizens have come to hold as an American value, according to a report released Wednesday. The 2016 Democracy Index, produced by the Economist Intelligence Unit in the United Kingdom, now lists the U.S. as a "flawed democracy" instead of the "full democracy" ranking it's held previously, citing the declining trust in government as the cause. The downgrade now puts the U.S. at 21 in international rankings, below Japan and tied with Italy. The number of "full democracies" dropped in 2016 from 20 to 19, according to the report. The economic organization gives grades through five categories: Electoral process and pluralism, functioning of government, political participation, political culture, and civil liberties.