"It's really exciting to be playing an adult in an office wearing sensible heels and sweaters with button-downs underneath them," Vanessa Hudgens told Mashable when discussing her new TV show. And for her, business casual truly is uncharted territory -- Vanessa Hudgens, the person you probably see when you close your eyes and concentrate on the words "Coachella fashion." We caught up Hudgens, who is launching a partnership with shopping app Covet Fashion, to talk about creating the avatar version of herself, personal style and playing an adult for the first time on the upcoming show Powerless. My pilot for NBC POWERLESS just got picked up! Feeling so grateful and blessed!! NBC recently picked up Hudgens' pilot, Powerless, a comedy about a normal woman working at an insurance company in a world populated by DC Comics characters. "This is actually the first time I've played an adult in a working environment, and it's so funny because I'm 27," Hudgens said.

How hip-hop fashion went from the streets to high fashion

Perhaps one of the greatest lessons hip-hop has taught the fashion world has been every man is a brand. Hip-hop artists have learned quickly that making music is just one small part of their cultural imprint. Consider hip-hop's early days when Adidas struck a $1 million deal with Run-DMC after the group performed the song "My Adidas" -- it's considered to be rap's first endorsement deal -- or Sean Combs' savvy move from music to apparel with the 1998 launch of his label Sean John or Kendrick Lamar's collaboration with Nike. Others including Karl Kani, Carl Jones of Cross Colours and the team behind FUBU (led by "Shark Tank" judge Daymond John) have made clothes expressly designed for hip-hop audiences. 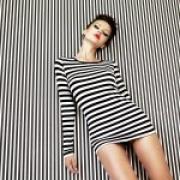 Artificial intelligence (AI) in fashion is no longer a secret and has widely been used to mostly help businesses to streamline processes and increase sales. But the skillsets of fashion designers and computer scientists are miles apart, so it's not until recently that the creative applications of AI in this industry have been explored. "Initial uses of artificial intelligence have focused on quantifiable business needs, which has allowed for start-ups to offer a service to brands," Matthew Drinkwater, head of the fashion innovation agency (FIA) at London College of Fashion (LCF), told Forbes. "Creativity is much more difficult to quantify and therefore more likely to follow behind." Seeing the opportunity for AI to play a bigger role in the creative process, LFC has launched an AI course aiming to develop creative fashion solutions and experiences that challenge the current approaches to fashion design.

B2B And B2C – Behind The Fashion Tech

Alexandra Shulman: How her time at Vogue shaped British fashion

The fashion world has been paying tribute to British Vogue editor Alexandra Shulman as she steps down from the industry bible after a quarter of a century. When she was appointed on 23 January 1992, Nicholas Coleridge - the then managing director of Vogue - said "Vogue is almost in her blood", referring to the fact her mother, father and brother had all worked at the publication. So how will her tenure be remembered and why was she such a great ambassador for the fashion world? We asked industry figures for their views. "Her contribution has been amazing, she had some fantastic covers.