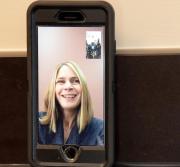 "Nephrotic syndrome is a condition where the kidneys are not able to function normally," explains Dr. Ashton Chen, Hazel's pediatric nephrologist at Wake Forest Baptist. "The result of that kidney disease is kidney failure, and so most children with the condition will need to either go on dialysis or get a kidney transplant at some point in their life. There's not a cure for this disease, but a kidney transplant is the closest thing to a cure."

California woman with a rare genetic blood disorder finds a kidney donor by posting a sign on the back of her car. A Seattle, Washington man recently donated one of his kidneys to his wife of nearly 30 years. "We're a team," Steve Kennedy told Q13 News of his decision. Last month, Steve donated his kidney to his wife, Lesley, who has long suffered from polycystic kidney disease, a condition that "causes numerous cysts to grow in the kidneys," according to the National Kidney Foundation. The cysts, which are filled with fluid, can damage kidneys if they grow too large.

Our kidneys play a critical role in keeping us healthy, a fact of which we are reminded several times each day. This organ's cellular complexity has hindered progress in understanding the mechanisms underlying chronic kidney disease, which affects 10% of the world's population. Using single-cell transcriptional profiling, Park et al. produced a comprehensive cell atlas of the healthy mouse kidney (see the Perspective by Humphreys). An unexpected cell type in the collecting duct appears to be a transitional state between two known cell types. The transition from one cell type to the other is regulated by the Notch signaling pathway and is associated with metabolic acidosis.

Every week, two million people across the world will sit for hours, hooked up to a whirring, blinking, blood-cleaning dialysis machine. Their alternatives: Find a kidney transplant or die. In the US, dialysis is a roughly 40-billion-dollar business keeping 468,000 people with end-stage renal disease alive. The process is far from perfect, but that hasn't hindered the industry's growth. That's thanks to a federally mandated Medicare entitlement that guarantees any American who needs dialysis--regardless of age or financial status--can get it, and get it paid for.