Tesla's Autopilot can 'easily' be used to drive without anyone behind wheel, Consumer Reports warns

Tesla's Autopilot system can "easily" be used to drive the automaker's vehicles without anyone behind the wheel, Consumer Reports said in a new demonstration. The magazine conducted the study on a test track after a widely publicized Tesla Model S crash in Texas on Saturday when two people were killed in a wreck that sparked an hours-long blaze. Local authorities said it appeared no one was in the driver's seat. The National Transportation Safety Board and National Highway Traffic Safety Administration have opened investigations into the incident. Tesla's Autopilot system enables automatic steering, accelerating and braking on roads with lanes, but it does not work in all situations.

The design of Tesla's Autopilot feature contributed to a January 2018 accident in which a Model S sedan smashed into the back of a fire truck in Southern California, according to federal safety investigators. It is the second time the National Transportation Safety Board has found Tesla partially responsible for a crash involving the semiautomated feature. The federal board says it's also investigating two other Autopilot-involved crashes. No one was hurt in the 2018 crash, but investigators found that the driver had flipped on Autopilot about 14 minutes before the crash and had not actively steered for the final 13 minutes. Investigators said the driver's inattention and overreliance on Autopilot were probable causes of the crash.

Consumer Reports tells Tesla to get rid of autopilot 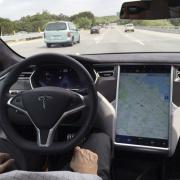 Consumer Reports on Thursday called for electric automaker Tesla to disable its semiautonomous autopilot mode in the wake of a May crash fatality in which autopilot failed to alert a driver of an oncoming vehicle. "While the exact cause of the fatal accident is not yet known, the incident has caused safety advocates, including Consumer Reports, to question whether the name Autopilot, as well as the marketing hype of its roll-out, promoted a dangerously premature assumption that the Model S was capable of truly driving on its own," the independent, nonprofit organization Consumer Reports wrote in a lengthy blog post. Specifically, Consumer Reports asked Tesla to disable autopilot's "autosteer" system, issue new guidance to drivers about the system's use, discontinue beta releases of semiautonomous technology and rename the autopilot feature. The National Highway Traffic Safety Administration is investigating the cause of the crash that killed Model S owner Joshua Brown, 40, of Canton, Ohio. In a letter sent Friday to the car company, NHTSA asked for all documentation related to the crash.

Consumer Reports magazine on Thursday urged Tesla Motors Inc to disable the automatic steering function on its electric vehicles and change the name of its Autopilot driving-assist system, which is under investigation after a driver was killed while using it. Consumer Reports, which has eight million subscribers and influences buyer decisions with its annual vehicle ratings, said the Autopilot name promotes "a potentially dangerous assumption" that the vehicle is capable of driving on its own. The California-based electric car maker defended the product and the name, saying it functions like the systems that airplane pilots use when conditions are clear. "The driver is still responsible for, and ultimately in control of, the car," the company said. The US National Highway Traffic Safety Administration (NHTSA) is investigating the 7 May crash and death in Florida of a Model S driver who was using Autopilot.

The U.S. announced Thursday the first fatality in a wreck involving a car in self-driving mode. The government said it is investigating the design and performance of the system aboard the Tesla Model S sedan. A file picture dated 30 April 2015 shows a Tesla Motors Model S on a parking lot of the Tesla Motors Headquarters in Palo Alto, California, USA. Questions abound in the wake of the first death of a driver of a Tesla car with its self-driving features engaged. The National Highway Traffic Safety Administration, which has begun a preliminary evaluation into the fatal May 7 crash of a 2015 Model S electric car, said its probe centers on the car's'Autopilot' feature.