North Carolina double-murder suspect, 13, back in custody after turned over by mother

Fox News Flash top headlines for Nov. 6 are here. Check out what's clicking on Foxnews.com Some professional wrestling fans voiced their dissatisfaction with All Elite Wrestling (AEW) champion Chris Jericho on Twitter Wednesday after President Trump's son, Donald Trump Jr., tweeted a photo with "Le Champion" and revealed that he recorded an interview for the wrestler's popular Westwood One podcast "Talk Is Jericho." "Had a great time today chatting about my new book #Triggered on #TalkIsJericho with #LeChampion @IAmJericho," Trump tweeted. "We had an awesome conversation and he's a really cool dude. The podcast drops later this week and you won't want to miss it!!!" Jericho, a former WWE Superstar, has reinvented himself in the upstart AEW, which airs on TNT, with an updated "heel" persona garnering praise from fans.

Rumors of a backstage fight between two prominent WWE wrestlers have been circulating the internet. Chris Jericho and Sin Cara reportedly had to be separated on Sunday as members of the "Monday Night Raw" roster were traveling from Leeds, England, to Monday's TV taping in Glasgow, Scotland. According to the Wrestling Observer, the incident began because Sin Cara was making "annoying noises" while on the tour bus. He refused to stop when Jericho demanded that he do so, and Sin Cara threw a punch at Jericho after they exchanged words. After the fight was broken up, Sin Cara was reportedly thrown off the bus.

The 3,800-year-old burial of an aristocratic young girl adorned with bronze jewelry and Egyptian scarabs shows century-long links between Jericho and Egypt. 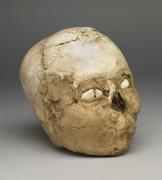 The 9,500-year-old Jericho Skull contains a human cranium packed with soil and covered with plaster to replicate individual facial features. Sea shells are used to represent the deceased's eyes. Researchers have reverse-engineered the ancient ritual practice that created one of The British Museum's most important artifacts--the Jericho Skull--revealing the face of a man whose remains were decorated and venerated some 9,500 years ago. The Jericho Skull is also considered the oldest portrait in the museum's collection, and, until recently, its most enigmatic: a truncated human skull covered in worn plaster, with eye sockets set with simple sea shells that stare out blindly from its display case. A facial reconstruction based on the human remains found inside the Jericho Skull.