Swisher, 2 Years After Last Game, Says He Has Retired

Selected by Oakland with the 16th overall pick in the 2002 amateur draft, Swisher hit .249 He won the World Series in 2009 and was an All-Star the following year.

Also known as the white man's "A." In a live interview conducted on Twitter, ReCode's Kara Swisher pressed Twitter CEO Jack Dorsey about what grade Dorsey would give his company and himself at fulfilling "tech responsibility." SEE ALSO: Jack Dorsey's footwear evolution: An investigation Dorsey replied with the oh-so-humble C. In other words, he knows he could do better, but he's really trying, guys! So he totally deserves to keep his job. C. We've made progress, but it has been scattered and not felt enough. 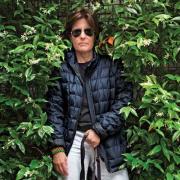 This was a fascinating interview, just finished it, happened to see your tweet and reply (I'm normally a Twitter lurker). Talk about someone who just "gets it". I'm sure the big names get more listens but please do more like this Kara with amazing unknown's.

The Atlanta Braves released high-priced outfielder Nick Swisher on Monday, ditching a former All-Star whose numbers plummeted the last two seasons. The team won't take much of a financial hit, even though Swisher is guaranteed 15 million this season. The Braves are set to receive a total of 14,631,148 from the Cleveland Indians by June 30 as part of last season's trade that brought Swisher and outfielder Michael Bourn to Atlanta for third baseman Chris Johnson. There was no room for him on the roster after the team signed Kelly Johnson, Jeff Francoeur, Gordon Beckham and Emilio Bonifacio to contend for spots on the bench. Also Monday, the Braves reassigned left-handed reliever Alex Torres to their minor league camp.

Kim Kardashian challenges you to avoid seeing her nude selfies

As it turns out, Kim Kardashian is not trying to lead a nude feminist Instagram cult, despite some confusion on the matter. Kardashian discussed her chill philosophy on being naked on the Recode Decode podcast with her pal Kara Swisher. "My personality has never been, 'I'm such a feminist and follow me and be naked,'" she said. SEE ALSO: Ariana Grande will defend Kim Kardashian's nudes until she dies "If you are conservative and that's how you are comfortable, more power to you," Kardashian continued. You don't have to look at what I do."