Freada Kapor Klein, the founder of the Level Playing Institute, talks about her experience and the future of diversity in the tech industry.

After Accusations Of Bias--AI Could Bring Diversity To Tech

"We could all do a better job of celebrating the women and underrepresented groups in science'" says Dr Jessica Wade today on International Day of Women and Girls in Science. Dr Wade is a physicist at Imperial College London well known for her work to raise the profile of under-represented groups in science, with hundreds of Wikipedia pages on female scientists she has written outside of her day job at the Centre for Plastic Electronics. There is a critical skills gap looming in the tech sector, and especially in data science and AI. Much more needs to be done to mobilize young people, especially poorly represented groups (including women) into Science, Technology, Engineering and Mathematics (STEM) careers. The U.K. Industrial Strategy has recognized the critical skills shortage that needs to be addressed to help the U.K. become a global leader in data, AI and other critical technologies for the future, and the need for education to address this skills shortage highlighted in the recent All Party Parliamentary Group on AI which will be looking at this as a key task area for 2019.

Countering the Negative Image of Women in Computing

Despite increased knowledge about gender (in) equality,7,27,38 women in STEM disciplines are still portrayed in stereotypical ways in the popular media. We have reviewed academic research, along with mainstream media quotes and images for depictions of women in STEM and women in computing/IT. We found their personality and identity formation continues to be influenced by the personas and stereotypes associated with role images seen in the media. This, in turn, can affect women's underrepresentation and career participation, as well as prospects for advancement in computing fields. The computer science Degree Hub15 in 2014 published its list of the 30 most influential, living computer scientists, weighing leadership, applicability, awards, and recognition as selection criteria. The list included only one female, Sophie Wilson, a British computer scientist best known for designing the Acorn Micro-Computer, the first computer sold by Acorn Computers Ltd. in 1978. A fellow elected to the prestigious Royal Society, Wilson is today the Director of IC Design at Broadcom Inc. in Cambridge, U.K., listed as number 30 of the 30 on the list.

Broadening the Path for Women in STEM 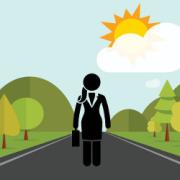 In 2018, girls and women are getting the message they belong in computer science as much as boys and men, thanks to a greater push for STEM (science, technology, engineering, and mathematics) curricula in schools and a vast number of programs available to them outside of school. Yet the numbers remain discouraging. Although computer science jobs are projected to grow 15% to 20% through 2020, the majority of these positions will be pursued and filled by men, according to Women in Computer Science (WiCS). In 2016, 26% of professional computing jobs in the U.S. workforce were held by women; 20% of the Fortune 100 chief information officer (CIO) positions were held by women, and 23% of Advanced Placement (AP) computer science test takers were female, based on data from the National Center for Women and Information Technology (NCWIT). "As STEM-related industries on a whole add over 1.7 million jobs in the coming years, there continues to be a notable absence of women in the field," according to the WiCS website.

As part of the lead-up to Transform 2021 coming up July 12-16, we're excited to put a spotlight on some of our conference speakers who are leading impactful diversity, equity, and inclusion initiatives in AI and data. We were lucky to land a conversation with Huma Abidi, senior director of AI software products and engineering at Intel. She spoke about her DE&I work in her private life, including her support for STEM education for girls in the U.S. and all over the world, founding the Women in Machine Learning group at Intel, and more. HA: This one is easy. I lead a globally diverse team of engineers and technologists responsible for delivering world-class products that enable customers to create AI solutions.