Eating the right amount of dietary fiber from breads, cereals, and fruits can help us avoid disease and disability into old age, according to an open-access paper published in The Journals of Gerontology, Series A: Biological Sciences and Medical Sciences by scientists from The Westmead Institute for Medical Research in Australia. Using data compiled from the Blue Mountains Eye Study, a benchmark population-based study that examined a cohort of more than 1,600 adults aged 50 years and older for long-term sensory loss risk factors and systemic diseases, the researchers found that out of all the factors they examined -- including a person's total carbohydrate intake, total fiber intake, glycemic index, glycemic load, and sugar intake -- it was, surprisingly, fiber that made the biggest difference to what the researchers termed "successful aging." Successful aging was defined as including an absence of disability, depressive symptoms, cognitive impairment, respiratory symptoms, and chronic diseases including cancer, coronary artery disease, and stroke. Fiber, or roughage, is the indigestible part of plant foods that pushes through the digestive system, absorbing water along the way and easing bowel movements. According to lead author of the paper, Associate Professor Bamini Gopinath, PhD, from the Institute's Centre for Vision Research, "Out of all the variables that we looked at, fiber intake --- which is a type of carbohydrate that the body can't digest -- had the strongest influence," she said.

How Old Is Your Brain? This AI Can Tell You

Delaying "brain age" may sound like the latest quick-fix gimmick on a late-night infomercial, but the science underlying the concept is very real. Rather than reflecting the average functional state of your chronological age, brain age looks at how well your brain is aging relative to how many birthdays you've celebrated. We all know people that seem sharper and act much younger than their age--that incredulous moment when you realize the 40-year-old you've been chatting with on the plane is actually a grandma in her 70s. Brain age, as a concept, hopes to capture the biological intricacies behind that cognitive dissociation. Longevity researchers have increasingly realized that how long you've lived isn't the best predictor of overall health.

A novel machine learning technique that would predict the biological age of a muscle and help combat sarcopenia has been developed. Sarcopenia is one of the major age-related processes and involves the loss of skeletal muscles and its function. The deep-learning based model can be used to estimate the relevant importance of the genetic and epigenetic factors driving this process within many age groups. "We believe that the most effective anti-ageing therapy should be tissue-specific, so we focused on the development of tissue-specific biomarkers of ageing. This work is an example of a marker of skeletal muscle tissue," said Polina Mamoshina, senior scientist at Insilico Medicine – a US-based next-generation artificial intelligence company. 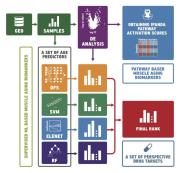 IMAGE: Insilico Medicine developed a novel deep-learning based model that predicts a biological age of a muscle. Thursday, July 5th, Rockville, MD - Insilico Medicine, a Rockville-based next-generation artificial intelligence company specializing in the application of deep learning for target identification, drug discovery and aging research announces the publication of a new research paper "Machine learning on human muscle transcriptomic data for biomarker discovery and tissue-specific drug target identification" in Frontiers in Genetics journal. Sarcopenia (from Greek "flesh poverty"), is one of the major age-related processes and involves the loss of skeletal muscle and its function. Age-associated muscle wasting remains an important clinical challenge that impacts hundreds of millions of older adults. It is associated with serious negative health outcomes such as falls, impaired standing balance, physical disability, and mortality.

But the roughage that's found in fruits, vegetables, and whole grains does far more than maintain digestive health; it may contribute to good health as we age, according to a new study. The study, published in The Journals of Gerontology, Series A: Biological Sciences and Medical Sciences, found that people who ate more fiber from cereals, breads, and fruits actually experienced a lower risk of age-related diseases and disability, like high blood pressure and even cognitive problems. The researchers examined how fiber intake contributed to successful aging compared to other factors like total carb intake, glycemic index, glycemic load, and sugar intake, and it turns out that fiber has the biggest impact on your health into old age. The researchers focused primarily on the link between carbohydrate intake and aging -- and found that people who ate more fiber were more likely to age successfully.