We hear a lot about China as the future giant of AI, but it would be a good idea to put China's level of achievement in perspective. A study published in February of this year by Elsevier helps us to put things into perspective. In this study, we find that the share of scientific publications of Chinese origin increased from 9% over the period 1998-2002 to 24% between 2013 and 2017. This is indeed important, but it is still less than the current 30% of European original items, even if higher than the 17% of the USA alone. However, quantity does not mean quality, and on the impact score of the articles (which measures article citations and their exposure to conferences), Chinese articles are rated between 1.08 and 1.77, when European articles are rated between 1.22 and 2.77, and Americans between 2.45 and 5.84.

While we need to be concerned about China's growing presence in Britain's electricity generation (Nuclear power: China's move into UK hints at scale of its wider ambitions, July 27), we should be asking searching questions of our government. They seem not to understand (or don't care about) the nature of the companies they are dealing with. Chinese state-owned enterprises are not like EDF or the German, Dutch and French state-owned firms that run our railways. They are dramatically different because China is governed by a Leninist state. Consequently, Chinese state firms are ultimately controlled not by the State Council's State Owned Assets Supervision and Administration Commission, but by the Communist party.

BEIJING (Reuters) - Pope Francis "loves China" and the Vatican hopes China has a great future, a Chinese state-run newspaper on Friday cited a visiting Vatican official as saying, in an expression of goodwill despite strained relations between the two.

China pushed back against U.S. pressure to stop its activity in the South China Sea Sunday, insisting that it has sovereignty over most of the disputed territory in the region and saying it "has no fear of trouble." Chinese Admiral Sun Jianguo said China will not be bullied in the South China Sea and will not back down over a pending U.N. ruling over its claims in a vital trade route. "We do not make trouble, but we have no fear of trouble," Sun said at Asia's biggest security summit in Singapore, where more than 600 security, military and government delegates had gathered over three days, Reuters reported. "China will not bear the consequences, nor will it allow any infringement on its sovereignty and security interest, or stay indifferent to some countries creating chaos in the South China Sea," Sun said. The South China Sea has become a hotly contested issue for the U.S. and China. 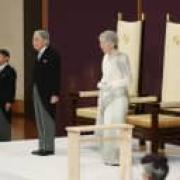 BEIJING - China has expressed appreciation for the achievements of Japanese Emperor Akihito, who declared his abdication on Tuesday, saying he has contributed to improving ties between the two nations. "Emperor Akihito visited China in 1992 and met with Chinese party and state leaders on many occasions. He has made positive contributions to China-Japan relations," Foreign Ministry spokesman Geng Shuang told reporters Monday, according to the ministry's website. "The China-Japan relations have come back to the right track and taken on the positive momentum of development," Geng said, while calling on Tokyo to make efforts to "properly handle sensitive issues." Emperor Akihito and Empress Michiko visited China in 1992 amid concern that he could be criticized or heckled publicly over Japan's aggression against China before and during World War II.