It seems like yesterday when Samsung announced the launch of its smart voice assistant, Bixby -- OK, I jest, it was ages ago. But after several delays, we can now finally say Bixby is globally available, as Samsung just announced its launch in more than 200 countries and territories. These include the U.K., Australia, Canada and South Africa -- we've asked Samsung for a full list and will update this article when we get it. Bixby was originally launched in the United States and Korea in July. SEE ALSO: Samsung's Bixby is finally available for all Galaxy S8 users This does not yet mean that Bixby has learned any new languages -- it still only understands U.S. English and Korean -- only that users worldwide are now able to install it.

Samsung Bixby Voice: How to set up and use the Galaxy S8 assistant

It's been a long time coming, but Bixby has finally found its voice. Samsung is gearing up to push out the final piece of its AI package, Bixby Voice, to all Galaxy S8 phones. Before long, millions of people will be saying, "Hi Bixby" to summon the new assistant. I had a chance to test an early version of Bixby Voice, and there's actually quite a bit you can already do with it. It's a little slow on the trigger at times, but I was impressed with how well it was able to understand me. 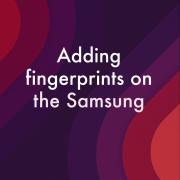 Samsung's new Galaxy S10 series is the company's third lineup of flagship phones to come with Bixby built-in. But the phones will be the first to let you actually change what that Bixby button does, addressing what has long been one of Samsung's most frustrating features. The company confirmed the change in a blog post, noting that the S10 will be the first of Samsung's phones to have "Bixby Key Customization," which lets users change their Bixby settings so that pressing the Bixby button once or twice will launch a third-party app of their choice. Samsung also said it would extend the feature to its earlier phones with Bixby, including the S8, S9, and Note9, in a future software update. SEE ALSO: Why won't Samsung let us see its foldable phone?

Now that the Galaxy S9 and S9 Plus are on sale, I thought we should take some time to get reacquainted with Samsung's ambitious virtual assistant. The sad truth is, the version of Bixby installed on the Galaxy S9 and S9 Plus isn't that much better than what shipped on last year's Samsung flagships. Bixby does a lot of things, but some of Samsung's most fascinating work has gone into Bixby Vision, a suite of seemingly useful image recognition tools. Here's the rub, though: They're just about all powered by third-party services, and there's often little reason to use Bixby over any of those standalone apps. Vision is legitimately useful in that it provides a single place to access these functions, but it's hard to get excited when Samsung's main selling point comes down to convenience.