The first time you see a strange robot walking down your street, it might be delivering a parcel. That's the future envisioned by Ford in a new research project that explores how robots and self-driving cars could work together to deliver groceries, fast food, and more. The robot in question is called Digit, and it stands just over five feet tall. It has a pair of skeletal legs, two arms ending in shapeless nubs, and a sensor array where its head should be. It's the creation of startup Agility Robotics, which has been developing bipedal robots since 2015 when the company was spun out of research from Oregon State University.

This week, Agility Robotics announced the official release of its two-legged delivery robot called Digit, which it believes could change the'last mile' logistics problems that have long vexed delivery companies. Digit has two robotic legs and two robotic arms and can pick up and hold packages weighing up to 40 pounds. Digit comes equipped with a LIDAR system that will allow it to avoid environmental obstacles and complete basic spatial tasks, such as handing a package its carry to another person (or another Anvil robot). The robot can currently pick up and carry packages autonomously but needs human input to guide it through new or unfamiliar spaces. Last year, Ford announced that it would purchase two units and said it would investigate using Digit to bring packages to customers front steps from self-driving delivery vehicles. 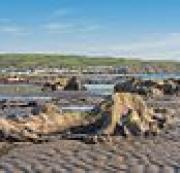 Self-driving delivery vehicles may be getting closer to becoming a reality, but Ford believes there's one leg of the process that could be further solved by robots. The auto giant has partnered with startup Agility Robotics to create a two-legged robot called'Digit' that can ferry packages to your doorstep. It solves a problem generated by self-driving delivery vehicles, which is that if there's no humans in the driver's seat that can drop off a package, autonomous robots can pick up the slack. 'It's not always convenient for people to leave their homes to retrieve deliveries or for businesses to run their own delivery services,' Ken Washington, chief technology officer at Ford, wrote in a blog post. 'If we can free people up to focus less on the logistics of making deliveries, they can turn their time and effort to things that really need their attention.

The 'Digit' robot could be the future of humanoid pizza deliveries

Agility Robotics has unleashed a new model that joins the exclusive club of humanoid robots. "Digit" is the company's first bipedal robot to have four degree-of-freedom arms. It can use those for balance, pushing doors and lifting boxes up to 40 pounds, or even to catch it during a fall.

As the pandemic wears on, humanoid robots that can perform general tasks could become increasingly important. They can move heavy objects in warehouses, assist with last-yard deliveries, and potentially be involved in other tasks where low human-to-human contact is preferable for safety reasons. Agility Robotics is one of the companies making these helper robots. The company, which was spun out of the Dynamic Robotics Laboratory at Oregon State University, first got broad attention last year when it began a pilot with Ford, delivering packages in concert with the car maker's autonomous vehicles. When the pandemic hit, Agility Robotics had already turned from a lab project into a real company, and it was reaching a level of project maturity with its bipedal Digit robot. Now the company, fresh off of a $20 million funding round, is accelerating its quest to claim a chunk of the robot-powered material-handling and logistics market with additional partnerships and impending new versions of Digit.