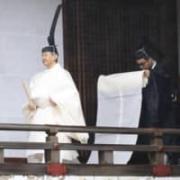 A canopied throne set to be used during Tuesday's ritual to proclaim the enthronement of Emperor Naruhito will be put on public display in Tokyo and Kyoto from December, according to the Imperial Household Agency. The takamikura, used in the Sokuirei Seiden no Gi ceremony, features a black lacquered dais with an octagonal structure, adorned with sculptures of golden phoenixes on its roof. The throne is approximately 6.5 meters high and weighs around 8 tons. Past emperors have ascended to the takamikura during their enthronement rites, with use of such an imperial seat believed to have begun in the eighth century. The current throne has been used since the 1915 enthronement ceremony of Emperor Yoshihito (1879-1926), posthumously known as Emperor Taisho. 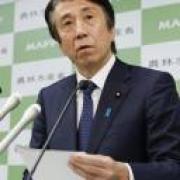 The Imperial Household Agency is arranging to transport by land the huge Takamikura throne to Tokyo from Kyoto around August, ahead of next year's ceremony to mark Crown Prince Naruhito's accession to the Chrysanthemum Throne, senior agency officials said Friday. The 8-ton, 6.5-meter-high canopied throne is expected to be transported by a private company and undergo repairs at the Imperial Palace for the Oct. 22 state ritual next year, when the Crown Prince ascends to the structure's elevated dais to proclaim his enthronement and receive the felicitations of representatives from home and abroad. The ceremony will be the key event among a number of enthronement rites to be held in 2019 for the Crown Prince, 58, who will succeed to the throne the day after Emperor Akihito abdicates on April 30. The abdication was arranged after the 84-year-old Emperor expressed his wish to step down due to his advanced age and weakening health. He will be the first emperor to relinquish the throne in more than 200 years. 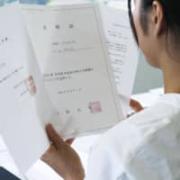 The government approved Thursday the outline of a ritual to be held this fall to proclaim the enthronement of Emperor Naruhito before international guests, following the style adopted by his father in 1990 despite a controversy surrounding its nature. In the Sokuirei Seiden no Gi enthronement ceremony starting at 1 p.m. on Oct. 22, the emperor will give a speech from a 6.5-meter-high canopied throne, known as the takamikura, and Prime Minister Shinzo Abe will deliver a yogoto congratulatory message and lead guests in three banzai cheers to wish for the emperor's longevity. The ritual, for which 2,500 people will be invited, has previously sparked controversy, with critics claiming the emperor's proclamation from a height above the prime minister violates the constitutional principle that the sovereignty of the nation resides in its people. Emperor Naruhito ascended to the throne May 1, following the abdication of his father Emperor Emeritus Akihito on April 30 -- the first Japanese monarch to do so in about 200 years. Under the latest plan, the prime minister will lead the cheers on the floor of the Pine Chamber state room in the Imperial Palace, following the previous example of Emperor Emeritus Akihito's enthronement.

Prince Hisahito, standing third in line to the Imperial throne, turned 10 on Tuesday. The birthday comes amid heightened interest in the Imperial Household system among the public after his 82-year-old grandfather, Emperor Akihito, indicated last month his readiness to abdicate in the future, voicing concerns he could one day become unable to fulfill his role as the symbol of the state, owing to his age. The son of Prince Akishino, the younger of the Emperor's two sons, and Princess Kiko is in his fourth year at an elementary school in Tokyo affiliated with Ochanomizu University. Prince Hisahito has since last fall been growing rice in a paddy on the premises of his family's residence in Tokyo's Minato Ward with the help of his parents and his elder sisters, Princess Mako and Princess Kako, according to the Imperial Household Agency. In his ordinary school life, he looks into characteristic points of various parts of Tokyo through maps and other materials, and gave a presentation of the area around his residence, according to the agency. 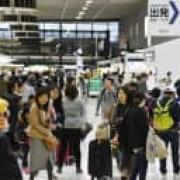 On the last day of his 30-year reign, Emperor Akihito on Tuesday said he "sincerely thanks" the Japanese people for their support of him as the symbol of the state, paving the way for the nation's first abdication in around 200 years and Crown Prince Naruhito's accession to the Chrysanthemum Throne at midnight. "Today, I am concluding my duties as the emperor," he told a nationally televised ceremony marking his abdication. "Since ascending the throne 30 years ago, I have performed my duties as the emperor with a deep sense of trust in and respect for the people, and I consider myself most fortunate to have been able to do so. "I sincerely thank the people who accepted and supported me in my role as the symbol of the state," he said, before closing his final remark as the emperor with a prayer for peace in times ahead. The outgoing emperor's remark followed Prime Minister Shinzo Abe's statement announcing his abdication.