Judge orders Uber not to use technology taken from Waymo

Uber's self driving car plans have been thrown into chaos after a federal judge ordered Uber to stop using technology that a key executive downloaded before he left Waymo, the Alphabet Inc. autonomous car arm that was spun off from Google. The order filed Monday in a trade secrets theft lawsuit also forces Uber to return all downloaded materials. Judge William Alsup in San Francisco says in the ruling that Waymo has shown compelling evidence that a former star engineer named Anthony Levandowski downloaded confidential files before leaving Waymo. High-profile: Levandowski, a'swaggering' six-foot-seven tech leader, is one of Silicon Valley's most significant figures in the development of self-driving cars In lidar -- or light detection and ranging -- scanning, one or more lasers sends out short pulses, which bounce back when they hit an obstacle, whether clouds, leaves or rocks. In self-driving cars, the sensors constantly scan the surrounding areas looking for information and acting as the'eyes' of the car.

Uber fires back at Google spinoff in self-driving car case

Uber has hit back at claims a key sensor on its self driving car was stolen from arch rival Waymo. It said its self-driving sensor technology was'fundamentally different' from Waymo's, blasting the Alphabet unit's claim that it profited from stolen files in the race to roll out the first driverless car. Uber said in a federal court filing that 14,000 of Waymo's computer files on autonomous technology never ended up on its servers, despite Waymo's claim that its former executive, Anthony Levandowski, stole them before joining Uber. Waymo sued Uber in February, seeking a preliminary injunction to stop it from using trade secrets and other intellectual property at the center of the case. High-profile: Levandowski, a'swaggering' six-foot-seven tech leader, is one of Silicon Valley's most significant figures in the development of self-driving cars In lidar -- or light detection and ranging -- scanning, one or more lasers sends out short pulses, which bounce back when they hit an obstacle, whether clouds, leaves or rocks.

Anthony Levandowski Asks a Judge Not to Send Him to Prison

The federal government on Tuesday asked a federal judge to sentence Anthony Levandowski to 27 months in prison for theft of trade secrets. In March, Levandowski pleaded guilty to stealing a single confidential document related to Google's self-driving technology on his way out the door to his new startup. That startup was quickly acquired by Uber, triggering a titanic legal battle between the companies that was settled in 2018. This story originally appeared on Ars Technica, a trusted source for technology news, tech policy analysis, reviews, and more. Ars is owned by WIRED's parent company, Condé Nast. 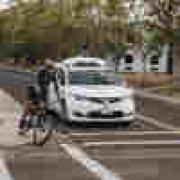