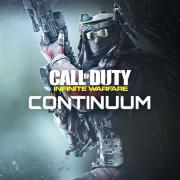 Call Of Duty: Infinite Warfare DLC 2 is almost here, and so are the preload details. Want to get into Continuum content as soon as possible? CharlieINTEL has revealed the PS4 download and unlock times to be aware of. As seen in the tweet below, DLC 2 will begin preloading as of midnight EDT on April 16. The content will be playable as of midnight on April 18.

The Call Of Duty: Infinite Warfare DLC 2 release date is just one week away, so its developers at Infinity Ward have released a trailer full of multiplayer gameplay on the expansion's four maps. Here's what we've seen so far. As announced by Activision last week, Infinite Warfare's second DLC is called Continuum. In terms of online multiplayer, it features four maps: Excess, Archive, Scrap and Turista. Full descriptions of each arena can be viewed here, but the driving theme is that IW has designed Continuum to cater to several different play styles simultaneously.

Call Of Duty: Infinite Warfare Zombies mode will get its third chapter soon, and its director at Infinity Ward has started teasing it in tweets. The quotes are cryptic, but here's what we know so far. The teases arrived Wednesday morning in the form of two very specific quotes from a man named Arthur McIntosh. The relation to DLC 2 is confirmed by a not-so-discreet hashtag. Here are the statements in their unedited vagueness.

Call Of Duty: Infinite Warfare has new DLC on Xbox One and PC today, and it's called Sabotage. The pack includes four new multiplayer maps and a fresh Zombies chapter for season pass holders. Debuting on PS4 in January, this is the first of four major paid additions to the game. Here's a basic recap of everything the package includes courtesy of our partners at iDigitalTimes. This time, our loveable cast of characters is taken to Bear Lake Summer Camp sporting new attitudinal archetypes.