In this blog, I look at a recent review that suggests brain computations being done at a scale finer than the neuron might mean we are far from the computational, power both quantitatively and qualitatively. The review is by Roger Penrose (Oxford) and Stuart Hameroff (University of Arizona) on their journey through almost three decades of investigating the role of potential quantum aspects in neurons' microtubules. As a graduate student in 1989, I was intrigued when Penrose, a well-known mathematical physicist, published the book, "The Emperor's New Mind", outlining a hypothesis that consciousness derived from quantum physics effects during the transition from a superposition and entanglement of quantum states into a more classical configuration (the collapse or reduction of the wavefunction). He further suggested that this process, which has baffled generations of scientists, might occur only when a condition, based on the differences of gravitational energies of the possible outcomes, is met (i.e., Objective Reduction or OR). He then went another step in suggesting that the brain takes advantage of the this process to perform computations in parallel, with some intrinsic indeterminacy (non-computability), and over a larger integrated range by maintaining the quantum mix of microtubule configurations separated from the noisy warm environment until this reduction condition was met (i.e., Orchestrated Objective Reduction or Orch OR). 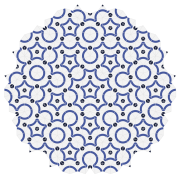 Given the crucial role of microtubules for cell survival, many researchers have found success using microtubule-targeting agents in the search for effective cancer therapeutics. Understanding microtubule responses to targeted interventions requires that the microtubule network within cells can be consistently observed across a large sample of images. However, fluorescence noise sources captured simultaneously with biological signals while using wide-field microscopes can obfuscate fine microtubule structures. Such requirements are particularly challenging for high-throughput imaging, where researchers must make decisions related to the tradeoff between imaging quality and speed. Here, we propose a computational framework to enhance the quality of high-throughput imaging data to achieve fast speed and high quality simultaneously. Using CycleGAN, we learn an image model from low-throughput, high-resolution images to enhance features, such as microtubule networks in high-throughput low-resolution images. We show that CycleGAN is effective in identifying microtubules with 0.93 AUC-ROC and that these results are robust to different kinds of image noise. We further apply CycleGAN to quantify the changes in microtubule density as a result of the application of drug compounds, and show that the quantified responses correspond well with known drug effects. 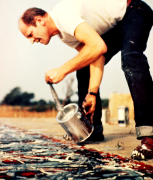 In one way, Jackson Pollock's mathematics was ahead of its time. When the reclusive artist poured paint from cans onto vast canvases laid out across the floor of his barn in the late 1940s and early 1950s, he created splatters of paint that seemed completely random. Some interpretations saw them as a statement about the futility of World War II, others as a commentary on art as experience rather than representation. As Pollock refined his technique over the years, critics became increasingly receptive to his work, launching him into the public eye. "We have a deliberate disorder of hypothetical hidden orders," one critic wrote, "or'multiple labyrinths.' " In 1999, Richard Taylor, a physicist at the University of Oregon, expressed the "hidden orders" of Pollock's work in a very different way.

The mechanics of severing microtubules

Microtubules are stiff protein polymers that play an important role in many dynamic cellular processes. Forming and maintaining complex arrays of microtubules requires a suite of enzymes, including those that sever microtubules. Microtubule-severing enzymes belong to the large family of AAA adenosine triphosphatase (ATPase) proteins, which transduce the energy from ATP hydrolysis into mechanical force. Recent structural studies have provided insight into the inner workings of this enzyme family. Zehr et al. add to these studies by reporting the x-ray structure of a monomeric AAA domain from the microtubule-severing protein katenin and cryo-electron microscopy reconstructions of the hexamer in two conformations.