With driverless cars, chatbots, smart speakers, drones and data-phishing creating sensational headlines on a daily basis, forward thinking brands should be asking the question; "What does the arrival of Artificial Intelligence and Automation REALLY mean for customer experience?" There are massive shifts underway in consumer behaviours, habits and attitudes, making it harder to predict the future. In our Whitepaper on AI and Automation, we sort the fact from the fiction, with revealing expert opinions and the results of a Webhelp commissioned YouGov study on public attitudes towards this booming technology and most importantly – the impact of machine learning on the CX industry. It's clear that young people have become a potent force for change and that age-related preferences could play a more critical role in defining behaviour than financial or situational factors. The infographic below shares some of the report findings in a bite-size format and our Disruptor Series takes an even deeper dive into the challenges faced by the customer experience industry.

Here's why your attitude is more important than your intelligence 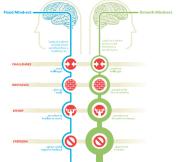 We all hit moments when we feel helpless. The test is how we react to that feeling. We can either learn from it and move forward or let it drag us down. There are countless successful people who would have never made it if they had succumbed to feelings of helplessness: Walt Disney was fired from the Kansas City Star because he "lacked imagination and had no good ideas," Oprah Winfrey was fired from her job as a TV anchor in Baltimore for being "too emotionally invested in her stories," Henry Ford had two failed car companies prior to succeeding with Ford, and Steven Spielberg was rejected by USC's Cinematic Arts School multiple times. Imagine what would have happened if any of these people had a fixed mindset.

This paper proposed a new estimation and control strategy to control the satellite attitude. As the attitude control strategy plays an essential role in the different kinds of space missions, scientists try to improve the performance of the satellite attitude system, regardless of the expense. In this study, we proposed an adaptive neuro-fuzzy integrated (ANFIS) satellite attitude estimation and control system. A pulse modulator is used to generate the right ON/OFF commands of the thruster actuator. To evaluate the performance of the ANFIS controller in closed-loop simulation, an ANFIS observer is used to estimate the attitude and angular velocities of the satellite using a magnetometer, sun sensor, and rate gyro data. Besides, a new ANFIS system will be proposed and evaluated that can simultaneously control and estimate the system. The performance of the ANFIS controller is compared with the optimal PID controller in a Monte Carlo simulation using different initial conditions, disturbance, and noise. The simulations are performed to verify the ANFIS controller's ability to decrease settling time and fuel consumption in comparison with the optimal PID controller. Also, examine the ANFIS estimator, and the results demonstrate the high skill of these designated observers. Moreover, we proposed an integrated ANFIS estimator and controller for satellite attitude control and estimation in the presence of noise and uncertainty, which can reduce the computational effort and offer smooth actuator actions.

The anti-vaccination movement threatens public health by reducing the likelihood of disease eradication. With social media's purported role in disseminating anti-vaccine information, it is imperative to understand the drivers of attitudes among participants involved in the vaccination debate on a communication channel critical to the movement: Twitter. Using four years of longitudinal data capturing vaccine discussions on Twitter, we identify users who persistently hold pro and anti attitudes, and those who newly adopt anti attitudes towards vaccination. After gathering each user's entire Twitter timeline, totaling to over 3 million tweets, we explore differences in the individual narratives across the user cohorts. We find that those with long-term anti-vaccination attitudes manifest conspiratorial thinking, mistrust in government, and are resolute and in-group focused in language. New adoptees appear to be predisposed to form anti-vaccination attitudes via similar government distrust and general paranoia, but are more social and less certain than their long-term counterparts. We discuss how this apparent predisposition can interact with social media-fueled events to bring newcomers into the anti-vaccination movement. Given the strong base of conspiratorial thinking underlying anti-vaccination attitudes, we conclude by highlighting the need for alternatives to traditional methods of using authoritative sources such as the government when correcting misleading vaccination claims.