This story was originally published by Wired and is reproduced here as part of the Climate Desk collaboration. An actual space laser is cruising 300 miles above your head right now. Launched in 2018, NASA's ICESat-2 satellite packs a lidar instrument, the same kind of technology that allows self-driving cars to see in three dimensions by spraying lasers around themselves as they roll down the street and analyzing the light that bounces back. But instead of mapping a road, ICESat-2 measures the elevation of Earth's surface with extreme accuracy. Although this space laser means you no harm, it does portend catastrophe. Today in the journal Nature Communications, scientists describe how they used ICESat-2's new lidar data to map the planet's land that's less than 2 meters above sea level, which makes it vulnerable to the creep of sea level rise.

Climate change could put 410 million people along coastal regions worldwide at risk from rising sea levels by 2100, an increase of more than 53 percent from current estimates, a new study reveals. A team led by NUS Environmental Research Institute in the Netherlands found there are currently 267 million people living on land that is less than six feet above sea level, with 62 percent of the population of located in the tropics – but those in Indonesia have the largest extent of at-risk land. The researchers used a projection of three feet sea level rise to see what climate change has in store for the world 79 years from now. The same regions will still be those most at risk, but the number of people in jeopardy will increase dramatically - 72 percent in the tropics and 59 percent in tropical Asia alone. The global average of sea level rise has increased about eight to nine inches since 1880, but a third of that has only happened in the last two and a half decades, according to Climate.gov.

From the California Delta to Jakarta, the World's Aquifers Are Collapsing 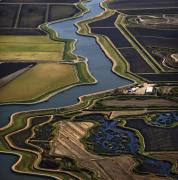 Hog Slough in the California Delta, provides water for 25 million people. This story was originally published by WIRED and is reproduced here as part of the Climate Desk collaboration. As California's Economy skyrocketed during the 20th century, its land headed in the opposite direction. A booming agricultural industry in the state's San Joaquin Valley, combined with punishing droughts, led to the over-extraction of water from aquifers. Like huge, empty water bottles, the aquifers crumpled, a phenomenon geologists call subsidence. 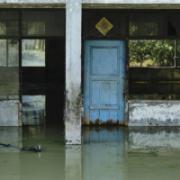 The economic impacts of rising sea levels will be felt four times faster by people living in some of the world's biggest coastal cities, which are sinking beneath their own weight into human-made cavities created below the surface. The scientific assessment published Monday in Nature Climate Change is the second in a month to show that coastal economies are more vulnerable than previously thought to the danger of rising sea levels. The extraction of groundwater and other resources from beneath cities including Jakarta, New Orleans and Shanghai is causing them to slowly sink, a phenomena called subsidence, resulting in greater risks from flooding and storm surges. "Due to its coincidence with major population centers, subsidence has global social and economic implications," reads the peer-reviewed research written by scientists from China, France, Germany and the U.K. "These results indicate that the impacts and adaptation needs are much higher than reported global sea-level rise measurements suggest." While sea-levels have risen at about 2.5 millimeters a year globally over the last two decades, coastal residents representing some 58% of the world's population have experienced average relative sea-level increases of 7.8 to 9.9 millimeters annually, according to the research, which used satellite data to gauge changes in land elevation.

NASA is poised to launch Saturday its most advanced space laser ever, ICESat-2, a $1 billion dollar mission to reveal the depths of the Earth's melting ice as the climate warms. The half-ton satellite, about the size of a smart-car, is scheduled to blast off atop a Delta II rocket on September 15 from Vandenberg Air Force Base in California. The 40-minute launch window opens at 5:46 am local time (1246 GMT). The mission is'exceptionally important for science,' Richard Slonaker, ICESat-2 program executive at NASA, told reporters ahead of the launch. That's because it has been nearly a decade since NASA had a tool in orbit to measure ice sheet surface elevation across the globe.