Are you being asked to provide GPUs to your application developers and data scientists for machine learning or high performance computing? Are users asking for more than one GPU to be usable for their application? Are you interested in cost-effective ways to share GPUs across the entire data science team? If any of these types of questions apply to you, then this new E-Book from VMware on the key decisions to take about GPU use on vSphere will be a great read for you. GPUs provide the computing power needed to run machine learning programs efficiently, reliably and quickly.

Exploring the GPU Architecture and why we need it. - VMware vSphere Blog

In the consumer market, a GPU is mostly used to accelerate gaming graphics. Today, GPGPU's (General Purpose GPU) are the choice of hardware to accelerate computational workloads in modern High Performance Computing (HPC) landscapes. HPC in itself is the platform serving workloads like Machine Learning (ML), Deep Learning (DL), and Artificial Intelligence (AI). Using a GPGPU is not only about ML computations that require image recognition anymore. Calculations on tabular data is also a common exercise in i.e. healthcare, insurance and financial industry verticals. 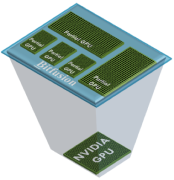