The 5 Apps Every Entrepreneur Needs in 2016

Being an entrepreneur has its perks. You make your own fate, you don't need to answer to anyone and not to mention, you take all of the profit. However, it also comes with its ceremonially high levels of responsibilities and stress. Thanks to technology, however, multitasking for entrepreneurs is much easier today than it was a decade ago.

Dare To Try Again: Confessions Of A Serial Entrepreneur

Opinions expressed by Forbes Contributors are their own. The author is a Forbes contributor. The opinions expressed are those of the writer. It was May 2016 and there I was again, deciding whether I wanted to take the plunge. Did I want to go through the emotional roller coaster, the bone-crushing uncertainty, the crazy work schedule that is starting a new venture...again? 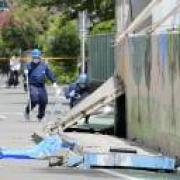 To get access to a network of young social entrepreneurs scattered across Japan, four high school and university students fearlessly presented their projects during a youth social entrepreneurship contest held by the Japan office of Ashoka, a U.S.-based nonprofit organization that financially supports social entrepreneurs worldwide. Among the four presenters who passed the contest's interview screening portion was Yoko Aoki, an 18-year-old high school student who earlier this year launched a cosmetic therapy and photography service for elderly women living in nursing homes. She was eventually chosen as one of the three winners of the Ashoka Japan Youth Venture contest held in Shibuya Ward, Tokyo, in early June. Aoki, who started her company Vivid Makeup in April, said her motivation behind joining the contest was to meet other young entrepreneurs -- people she rarely encounters during the course of her daily life. "At school, I seldom find anyone around my age who can share a vision with me, so this program provides a great opportunity for me to become inspired and strengthen my motivation," she explained.

Pot entrepreneurs are running out of patience and money while waiting on L.A. permits

The problem facing many entrepreneurs now -- whether they are eligible for the equity program or not -- is that they decided to spring for storefronts, knowing that there would be limited real estate available for cannabis businesses. When Los Angeles passed its regulations on cannabis businesses, it set caps on the number of retail shops in each neighborhood and banned them from opening near schools, public parks and other marijuana shops. Cannabis growers and manufacturers also face restrictions on where they can operate.